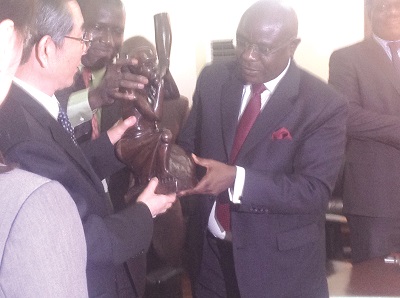 China attaches importance to the development agenda of Ghana in particular and the West Africa sub-region in general  and will do its best for the realisation of  their set goals, Mr Ma Biao, the Vice Chairman of the 12th National Committee of the Chinese People's Political Consultative Conference, has stated.

At a meeting with Mr Edward Doe Adjaho, the Speaker of Parliament, in Parliament yesterday, he said China would do everything possible to support the West African sub-region to meet her development agenda.

Mr Biao is leading a 10-member delegation on a three-day working visit to the country.

He arrived in the country last Sunday and is using his visit to deepen China's bilateral relationship with Ghana.

He was met on arrival by the First Deputy Speaker, Mr Ebo Barton-Odro.

In a brief remark at the airport, Mr Barton-Odro said he was aware of the numerous assistance packages the Chinese Government had given to Ghana, and urged that such relationship "should go on."

Dr Yakubu Alhassan, MP for Mion and Chairman of the Ghana-China Parliamentary Friendship Association, in an interview with journalists, said key on the agenda of the Chinese delegation in the country was to deepen bilateral relations between Ghana and China.

At the meeting with the leadership of Parliament yesterday, Mr Biao said the two legislatures had to work together to deepen the traditional relationship between Ghana and China.

He stated that discussions on the $3 billion Chinese loan to Ghana for its infrastructural development were going on smoothly.

Mr Adjaho stated that the relationship between China and Ghana should benefit people of the two countries since without that "we will be seen as meeting to drink tea".

He noted that in spite of the level of development taking place in China that country still admitted that it was facing challenges.

Mr Adjaho, therefore, called on Ghanaians to work hard to surmount the country's development challenges in order to be able to rub shoulders with the developed countries.

Present at the meeting were the Majority Leader, Dr Benjamin Kunbuor, the Minority Leader, Mr Osei Kyei-Mensah-Bonsu, and Dr Ahmed Yakubu Alhassan, MP for Mion and Chairman of the Ghana-China Friendship Association.