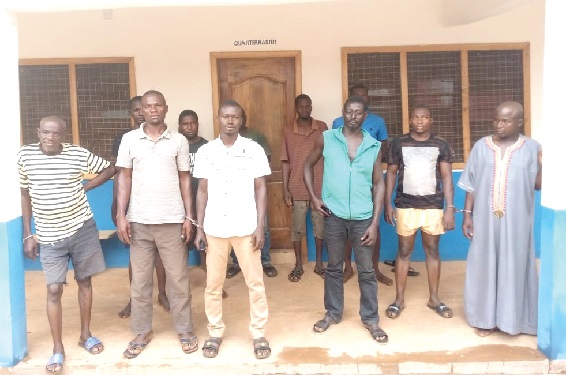 Some of the Chereponi suspects

Twelve people, believed to be supporters of the New Patriotic Party (NPP) in the Chereponi District in the North East Region, have been arrested in connection with last Sunday’s disturbances over the nomination of Madam Zuweatu Mada Nashiru as District Chief Executive(DCE) of the area.

They were picked up in an operation by the North East Regional Police Command yesterday.

Briefing the media, the North East Police Public Relations Officer, Assistant Superintendent of Police (ASP), Mr Robert Anabiik Angmain, said the suspects were arrested after the police managed to identify some of the perpetrators.

“On September 20, 2021, the North East Region Commander, Deputy Commissioner of Police (DCOP) Mr Moses Ali Apenchim, led a team of police to arrest the suspects in the disturbances.

Some aggrieved supporters of NPP in the Chereponi District last Sunday went on rampage following the announcement of Madam Nashiru as the DCE nominee for the area.

Immediately after the announcement of the metropolitan, municipal and district Chief Executives (MMDCEs) nominees by the Minister of Local Government and Rural Development, Mr Dan Botwe, the angry supporters stormed the party’s constituency office, broke into it and vandalised everything.

They also set some party property, including structures and paraphernalia, on fire.

The youth were said to be registering their displeasure against the nomination of the Madam Zuweira Mada Nashiru, who they said was not their preferred candidate.

According to the protestors, the nominee was a staunch member of the National Democratic Congress(NDC) in the constituency who was the daughter of Hajia Mary Nakobu, a former DCE for the area in the erstwhile John Mahama regime.

One of the leaders of the aggrieved supporters, Adam Munkaila, told the Daily Graphic that “we can’t trust the loyalty of Madam Zuweira because she is a well-known NDC member; we preferred S.K Orlando who has suffered for the party”.

“We are not asking for anything much but we want the president to rescind his decision and appoint Orlando for peace to prevail in the constituency” he said.