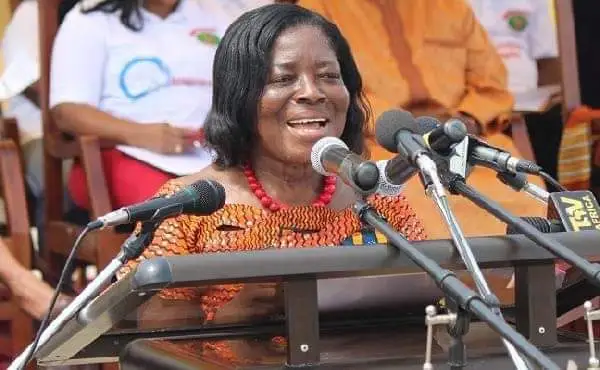 She was a former Member of Parliament (MP) for Gomoa West, NDC National Women’s Organiser, regional minister and Council of State member.

Hundreds of mourners, sympathisers and well-wishers, including traditional rulers, members of the clergy and supporters of both the NDC and NPP thronged the Gomoa Abora D/A Basic School park where the funeral was held.

On behalf of President Nana Addo Dankwa Akufo-Addo, Mrs Assan donated GH¢ 20,000 to the late NDC stalwart’s children and family as his contribution to the funeral.

In a sermon, a Bishop Emeritus of the Evangelical Lutheran Church of Ghana, Rt Rev. Dr Paul Kofi Fynn, described the late Mrs Doe as someone who had strong faith in God.

“Despite her busy political life, she had time for God and devoted everything to the service of the Almighty God. Indeed, she was a devout Christian who supplied bible and other literature to the church,” he said.

In his tribute, former President Mahama described the deceased as loyal and devoted to the party and country.

He said Mrs Doe was an embodiment of limitless courage, commitment and passion for service to the party and the nation which was evident in the various capacities she served.

Mrs Assan also described Mrs Doe as a distinguished woman who stood out in the male dominated political landscape.

She said despite the impediments in the way of women who ventured into politics, Mrs Doe remained focused in the discharge of her duties as MP, minister of state, regional minister and Council of State member.

She urged female political activists to learn from Mrs Doe’s style of doing politics to build upon her lasting legacy and contribute effectively to political discourse and governance of the country.