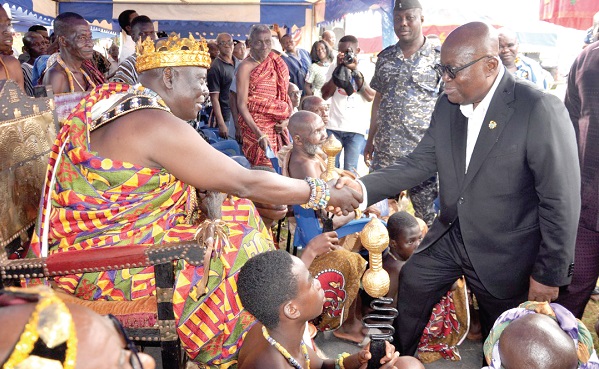 The Paramout Chief of Peki, Deiga Kwadzo-Dei II, has entreated political parties to go about their campaigns with decorum, devoid of insults.

That, he said, would help bring down the unnecessary tension that often characterises politics in the country.

Deiga Kwadzo-Dei was speaking at a grand durbar at Peki-Blengo last Saturday to mark the 175th anniversary of the Evangelical Presbyterian Church, Ghana (EPCG).

The event, which was graced by the President, Nana Addo Dankwa Akufo-Addo, was on the theme: “A journey of 175 years in ministry: Achievements, challenges and the way forward.”

Deiga Kwadzo-Dei said the presence of the EPCG in Peki over the decades was readily evident in the high standard of discipline among the people.

The rich human values and godliness imparted to the people by the church and early missionaries, he said, were still part of the culture of the people of Peki.


Therefore, they would be preserved to benefit generations yet unborn, Deiga Kwadzo-Dei added.

“We in Peki take great pride in having a hand in bringing God’s salvation and modern-day civilisation to ourselves and to all of Eweland, both in Ghana, Togo and beyond,” he added.

“Those legacies, which were built by the church without any political considerations, were a huge treasure, far above acrimonious partisan politics,” Deiga Kwadzo-Dei insisted.

He touched on the current economic challenges and said in spite of the hardships, it must be acknowledged that the most difficult part of a race was where one had to take the last few steps to breast the tape.

“In these difficult times, we still say, finish hard and have your name written in the hearts of these parts of Eweland,” he told the President.

For his part, President Nana Addo Dankwa Akufo-Addo said the EPCG had highly valid reasons to be proud for celebrating its 175th anniversary.

He said the church’s contributions to quality education, healthcare and national development in general, were readily evident not only in the Volta Region but also everywhere in the country.

The President said the torch lit by the young German missionary, Lorenz Wolf, 175 years ago was still brightening corners of darkness today, playing crucial roles in the progress of the nation.