Arm yourselves with data on projects- Bawumia urges MMDCEs 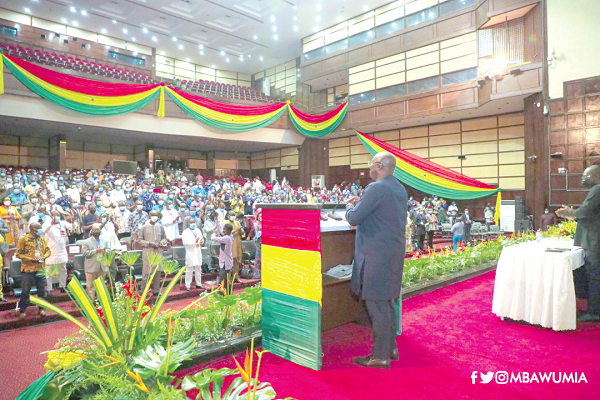 The Vice-President, Dr Mahamudu Bawumia, has charged Metropolitan, Municipal and District Chief Executives (MMDCEs) to arm themselves with facts and data on projects to defend the records of the government.

He said it was important for MMDCEs to ensure all planning officers at the assemblies took part in the process of updating the delivery tracker which accommodated all the projects undertaken by the government by close of the year in order to have the information on implemented projects on their fingertips.

Dr Bawumia made the call when he addressed the closing ceremony of a two-day orientation programme for MMDCEs in Accra last Wednesday.

Dr Bawumia said the Akufo-Addo administration had performed so well, and that record needed to be defended at every given opportunity.

Doing that, he explained, would douse the “ propaganda” of the opposition National Democratic Congress ( NDC).

“Approach your work with confidence because our record will always be superior to the record of the NDC which is specialised in propaganda.

“But, the only way you can counter propaganda is with facts and data because they are very afraid of data,” the Vice-President told the appointees.

He indicated that the 2024 elections would be fought at the local level and when they (the MMDCEs) were abreast of the projects, the NDC could not sit in Accra and use propaganda to lie about the projects.

Dr Bawumia stressed the contributions of MMDCEs towards the government’s transformation agenda and reminded them of their impact on the success of the New Patriotic Party (NPP) as well as that of the government in general.

If you succeed, then President Nana Addo Dankwa Akufo-Addo and the NPP will succeed,” Dr Bawumia stated.

“The NPP is going to transform Ghana because many governments in two terms have not been able to do what the NPP has done in its first term, he added.”

The Vice-President reminded the MMDCEs of the object for the many flagship programmes of the government, saying the philosophy and economic strategy under the leadership of President Akufo-Addo was driven by the need for decentralisation and inclusion of every part of the country in its forward movement.

He said that “led to the introduction of programmes like the Planting for Food and Jobs to ensure every farmer benefited, same as the One Constituency, One Ambulance so that every constituency benefited; the One District, One Warehouse as well as the Free SHS for everyone to benefit.”

On the digitalisation programme, Vice-President Bawumia announced that next year the Lands Commission, the distribution of fertiliser, premix fuel distribution as well as the cocoa sector would all be digitised to deal with issues of land guards and also clear the bottlenecks associated with those sectors.

To that end, he said, all the database of the fisherfolk, among others, was being collated to aid the process.