Amidu takes on Deputy AG again, asks him to be humble 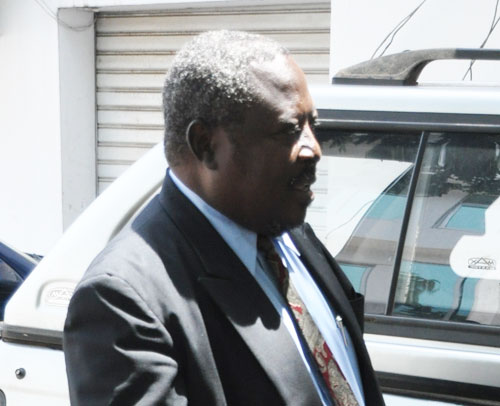 Former Attorney General (AG) Martin Amidu has cautioned the Deputy Attorney General and Minister of Justice, Dr. Dominic Ayine not to allow his position to eat into his head to the extent that he "may think that he can insult former senior Ministers who have paid their dues to the Republic".

Mr Amidu, in a statement issued Friday, noted that Dr. Ayine cannot refer to him as being petty in the name of a generational change of leadership, cautioning that "The ethics of the legal profession does not allow juniors to insult senior lawyers, such as former Attorneys General, only to eat back their words as he [Ayine] has done."

This follows recent brouhaha over whether or not the AG's Department played any role to assist Amidu's efforts to retrieve some monies payed as judgement debts.

Why Is Dr. Dominic Ayine, Deputy Minister For Justice, Making A Change Of Face On The Press Release On “ The Attorney General On Waterville Holding Judgment” And Martin Amidu’s Petty Reaction But Still Being Untruthful? : By Martin A. B. K. Amidu

Dr. Dominic Ayine, Deputy Minister for Justice’s response to my rejoinder to the office of the Attorney General’s Press Release dated 18th June 2013 which was signed by him was to be the following insult: “I think it is a petty reaction to rather serious matters. I will decline the interview.”

In all responsible Governments a Deputy Minister cannot issue a press release on an official letter head on his own initiative. I was a Deputy PNDC Secretary/Minister from February 1983 to January 2001. I was Deputy PNDC Secretary for Justice and Deputy Attorney General from September 1988 to 7th January 2001. Dr. Dominic Ayine’s nomination as Deputy Minister for Justice and Attorney General was approved by Parliament at the end of April 2013 and he was sworn into office with 34 other Deputy Ministers on or about 2nd May 2013. He is therefore barely even two full months in office as a Deputy Minister for Justice. It is to be assumed that Dr. Ayine wrote and signed the press release dated 18th June 2013 with the approval of and upon instructions to allege that the Attorney General supported me in prosecuting the Waterville and Isofoton cases. I also take it that his decision to insult my rejoinder to the press release as “petty reaction to serious matters…” was done under his authority as a Government Minister.

I, however, read to-day, 20th June 2013, less than twenty four hours after his “petty response to serious matters” response a change of face on myjoyonline under the title: “We did not give Martin Amidu direct support in Waterville case; A-G’s Dept clarifies.” Why did Dr. Ayine eating back his arrogant words – “I will decline the interview” – and grant an interview to the petty reaction to serious matters to the same radio station he sent the text message? Did the public reaction to the press release dictate that the spin did not work? I hope that the less than two months old Deputy Minister for Justice has learnt the hard way that when one does not have an immediate answer to a problem, insulting a far senior person who has made the rejoinder is not an acceptable conduct in all Ghanaian cultures. The recent culture of young people insulting elders to qualify for ministerial appointments is what is bringing this country down and ought to stop!

Dr. Ayine is reported to have maintained in his interview of today that: “…the Attorney-General was merely a nominal defendant and that did not prevent her from having an interest in a matter which coincides with that of the plaintiff.” With all due respect to Dr. Ayine, a Deputy Minister of Justice, he does not appear to have read the brief before making that untruthful assertion. The plaintiff asked for substantive declaratory reliefs against the Attorney General as the 1st Defendant in both Waterville/Woyome, and the pending Isofoton case. Dr. Ayime should read the writ properly upon which the judgment in the Waterville case was given and it would be clear to him that reliefs 5 and 9 of the plaintiff’s writ specifically asked for: “A declaration that the 1st Defendant’s conduct in paying …. are accordingly null, void, and without effect whatsoever.” Specific reliefs were also claimed against the conduct of the 1st Defendant in the pending Isofoton case. In both legal submissions I charged the 1st Defendant and the other defendants with collusion to defraud the Republic of the people’s money. I have never heard of such a defendant being a nominal defendant. Being untruthful to the public is not a hall mark of an ethical lawyer let alone a Deputy Minister of Justice who is expected to deal fairly and truthfully with “We the People” in whose name justice must be dispensed.

But the approval of Dr. Dominic Ayine’s nomination for appointment as Deputy Minister by Parliament was done after 26th April 2013 when the Supreme Court had heard the two cases and adjourned them to 14th June 2013 and 21st June 2013 respectively for judgment. The Waterville/Woyome case was handled in Court by a Chief State Attorney who joined the Attorney General’s Department in 1989 when I was already a PNDC Deputy Secretary and Deputy Attorney General. The Isofoton case which is still pending for judgment was handled by a Principal State Attorney who is also far senior at the Bar and joined the Department when I was already there. Indeed almost all the current Chief State Attorneys joined in 1989. I want to believe that Dr. Ayine is referring to the Attorney General as a nominal defendant because has not read the brief or consulted the two very senior and experienced Attorneys handling the cases. Dr. Ayine gives me the impression of a lawyer who is so excited with his recent appointment that he is trying to run before he can walk in the Attorney General’s Department. He needs to be humble and learn from those non-political senior lawyers who have kept the Attorney General’s office running all these years.

Dr. Ayine may think that he can insult former senior Ministers who have paid their dues to the Republic as being petty in the name of a generational change of leadership. He is beginning a career in the Attorney General’s Department where the ethics of the legal profession does not allow juniors to insult senior lawyers, such as former Attorneys General, only to eat back their words as he has done. What respect does he expect from his subordinates who have worked with me for several years and are in a position to judge between us?

In any case what is the guarantee that the Court is going to assume jurisdiction and to decided the Isofoton case in the plaintiff’s favour to warrant the haste of association with the plaintiff? Stop the spin!