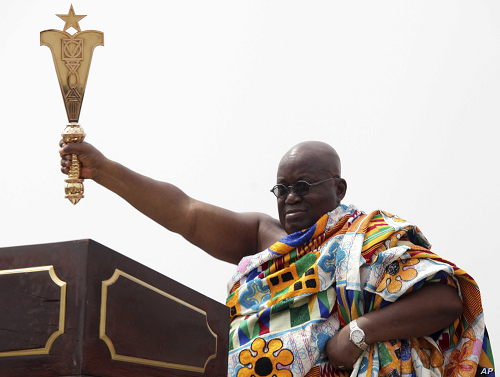 The President-elect, Nana Addo Dankwa Akufo-Addo, will be sworn into office within the precincts of Parliament House before Parliament on January 7, 2021, and not at the usual venue for presidential inaugurations — the Independence Square.

The move is in accordance with Article 57(3) of the 1992 Constitution and “international best practices”.

The change in venue is also in response to a request made to the President by the leadership of Parliament in November this year that all subsequent swearing of Presidents into office be done in Parliament, in accordance with law.

A Deputy Minister of Information, Mr Pius Enam Hadzide, made this known at a press conference to update the nation on the work of the Transition Team in Accra yesterday.

Article 57(3) of the 1992 Constitution states: “Before assuming office, the President shall take and subscribe before Parliament the Oath of Allegiance and the Presidential Oath set out in the Second Schedule to this Constitution.”

In spite of this provision, by convention, all elected Presidents under the Fourth Republic, except during the first term of President John Agyekum Kufuor (which commenced on January 7, 2001), have been sworn in at the Independence Square.

While some commentators have described the usual practice as unconstitutional, others have stood for it, arguing that a President-elect could be sworn in anywhere, so long as Parliament is convened, and not necessarily within the precincts of Parliament House.

The past swearing-in of Presidents had Parliament relocating to the Independence Square on the day of the inauguration immediately after the new Speaker of Parliament and the Members of Parliament have been sworn into office at Parliament House.

Speaking at the inauguration of the Job 600 Annex Project at Parliament House on November 3, 2020, the Majority Leader, Mr Osei Kyei-Mensah-Bonsu, had hinted of the resolve of Parliament to discontinue the practice of swearing in elected presidents at the Independence Square.

It was the case of the Majority Leader that the relocation of Parliament to the Independence Square for the inauguration of Presidents created discomfort for MPs, to the extent that some of them did not attend the inauguration.

“It is hard to relate that often, before the sitting is suspended for the House to reconvene at the Independence Square, the public would have generally taken over the sitting of the relocated Parliament.

“In the event, MPs are dislodged from what is supposed to be their own house. MPs, especially those from the party that might have lost the elections, are subjected to vile language in their own house.

“That is not a good practice and, accordingly, the House has decided that the President-elect must, henceforth, subject to security considerations, be sworn in within the precincts of Parliament before Parliament and in Parliament,” Mr Kyei-Mensah-Bonsu noted.

“The transition team has favourably considered the request of the Parliament of Ghana, as stated by Mr Kyei-Mensah-Bonsu, and has decided that the swearing-in of President Akufo-Addo on 7th January, 2021 shall happen before Parliament and within the precincts of Parliament.

“The Inauguration Subcommittee of the 2020 Presidential Transition Team is, therefore, working with Parliament to ensure a successful and COVID-19 compliant inauguration,” Mr Hadzide stressed.

He further intimated that all the COVID-19 preventive protocols would be duly complied with, adding that the modalities on attendance would be communicated in due course.