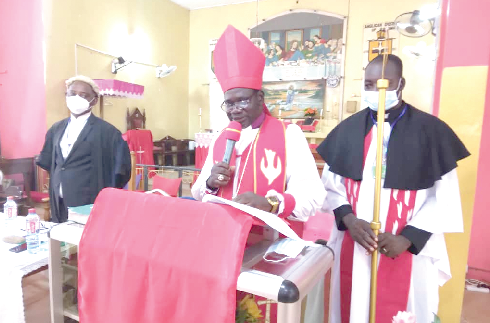 The Anglican Bishop of Tamale, Rt Rev. Dennis Debukari Tong, has called on the government to take positive and concrete steps to address the issue of youth unemployment in the country.

That, he said, would reduce the level of desperation, frustration and hopelessness among the youth.

According to him, youth unemployment had become one of the greatest dangers the country was faced with and there was the need for the government to address the issue with the attention it deserved.

“There is the need for something positive, concrete and reassuring to offset the huge youth unemployment deficit in the country now to reduce desperation, frustration, hopelessness among the youth and their lack of direction to avert a bombshell that is waiting to explode”, he noted.

Rt Rev. Tong made the call at the 10th Diocesan Synod of the Anglican Diocese of Tamale held at the Bishop Aglionby Memorial Cathedral at Tishigu, a suburb in the Tamale Metropolis, last Friday.

The synod was on the theme: “Building the Diocese: A Collective Responsibility of All the Gifted.”

Rt Rev. Tong noted that despite efforts by successive governments to address the challenges of the nation, saying: “Synod is sad to note that the situation is not improving. Dominant is youth unemployment which has become one of the greatest dangers the country is confronted with”.

Touching on the economy, he stated that the synod believed that the government was working to fix the nation but asked those in authority to accelerate the process.

According to him, the single-digit inflation would be meaningless until it was translated into a reduction in the prices of goods in the country and the ordinary Ghanaian having money in his or her pocket to buy.

“The single-digit inflation we hear these days is just numbers. What is important to the ordinary Ghanaian is to have the price of cement and other building materials reduced to their pocket’s content. They should have money in their pocket, have the ability to meet costs, have access to light and water and have the ability to pay their bills; then they can see the meaning of single-digit inflation. Otherwise, it is meaningless and life also becomes meaningless”, he stated.

Rt Rev. Tong on behalf of the entire membership of the Anglican Diocese of Tamale congratulated President Nana Addo Dankwa Akufo-Addo on being re-elected for his second term in office.

“We know the task ahead is not an easy one as the COVID-19 pandemic is still raging on. As a church we believe and trust that God who has called you to lead this nation at this time in our history will continue to direct and guide you to make the right decisions”, he stated.