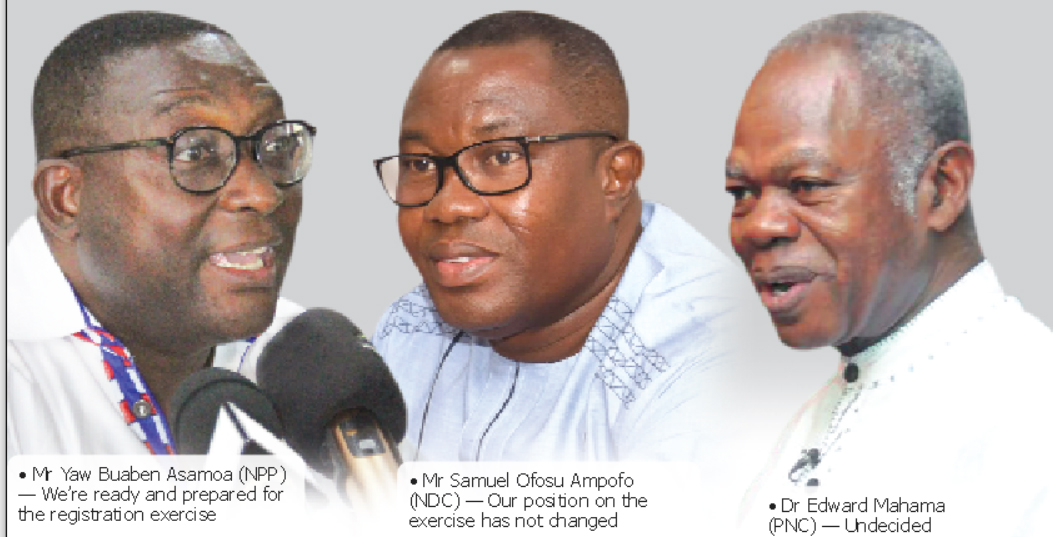 Ahead of the mass voters registration exercise scheduled to begin on June 30, 2020, nine political parties and an independent presidential candidate in the 2012 and the 2016 elections have shared opinions on the national exercise.

While five parties and the independent candidate say they are ready and already training agents as well as representatives ahead of the exercise, three parties say they are still not certain on participating in the exercise. One of the political parties, however, said they were awaiting details of the exercise from the Electoral Commission (EC) before taking a position.

The political parties that said they were ready are the New Patriotic Party (NPP), the Convention People’s Party (CPP), the Liberal Party of Ghana (LPG), the Ghana Union Movement (GUM) and the National Democratic Party (NDP), with Mr Jacob Osei Yeboah being the independent presidential candidate, now gunning to become a presidential candidate in the December 7, 2020 polls.

The parties opposed to the exercise are the National Democratic Congress (NDC), the All People’s Congress (APC) and the Progressive People’s Party (PPP).

The People’s National Convention (PNC), however, said it was awaiting a gazzete on the registration exercise from the EC to take a final decision on it.

Speaking on behalf of the NPP, the party’s Communications Director, Mr Yaw Buaben Asamoa, said the party was ready and prepared to partake in the process that would be used to compile a new biometric voters register.

He said the party had begun training its officials in preparation for the exercise.

“We are preparing for the registration exercise across the nation and so, yes, we are ready to partake in it,” he said.

The acting General Secretary of the CPP, Mr James Kwabena Bomfeh Jnr, for his part, said the party had already alerted its members in the regions to the exercise and urged them to prepare for it.

Mr Bomfeh, however, said the exercise, which was barely six months to the December 7 elections, would be a herculean task.

“We are six months away from the general election and the preparation towards elections are huge and cumbersome, including the compilation of the new register at this time; it’s not going to be an easy task.

“So the EC has a huge responsibility to make sure that it does this with speed and haste, but also with caution, because election matters are very delicate and complex and you cannot afford to make any mistake,” he said.

The General Secretary of the NDP, Alhaji Mohammed Frimpong, said the party was ready to participate in the exercise.

Alhaji Frimpong said the party had informed all of its members across the country about the upcoming exercise.

“We have told all our regional officers to mobilise and sensitise our membership throughout the regions. We are ready; we are not opposed to it at all, as it will enhance our democracy,” he said.

For his part, the National Chairman of the LPG, John Ameka, said the party had started educating its members on how to adhere to the COVID-19 protocols during the registration period as part of its preparation.

He urged Ghanaians to go and register, so that they would have the opportunity to choose the next President.

The General Secretary of the GUM, Rev. Anthony Gold Ahinful, indicated that the party had trained a number of agents who would monitor the registration exercise across the country.

“We are sending two agents to each polling station. They will be present throughout the registration period,” he added.

The independent candidate, Mr Jacob Osei Yeboah, who is also aspiring to contest the 2020 elections, encouraged all Ghanaians to participate in the exercise.

He said the duty of political parties was to encourage their members to engage in the exercise.

“We are encouraging our supporters and every Ghanaian to go and register, so that everyone will have the opportunity to exercise his or her franchise,” he said.

The National Chairman of the NDC, Mr Samuel Ofosu Ampofo, said the party’s position on the matter had not changed.

He said the NDC was of the view that compiling a new register, with barely six months to the election, was not “acceptable”.

“We are not in a secure environment to undertake a mass registration exercise and again we have said the timing is also not good,” he said.

For his part, the Director of Operations of the PPP, Nana Ofori Owusu insisted that the EC should not compile a new register, adding that “we pray that they do not do a new register”.

He indicated that the party was yet to send a communique to its members on its decision.

The founder of APC, Mr Hassan Ayariga, said the party was opposed to the compilation of the new register because it was a waste of resources.

He said the current register had the best form of identification, which was the fingerprint, hence there was no need to compile a new register.

Mr Ayariga said there was already voter apathy due to the mismanagement of the economy by both the NPP and the NDC governments.

That, he explained, would also make Ghanaians not even show up to register, especially with the COVID-19 pandemic wreaking havoc.

For the PNC, the Leader of the party, Dr Edward Mahama, and its National Chairman, Mr Bernard Mornah, said although the party received a letter on June 9, this year, informing it that the process would begin on June 30, it was demanding a more detailed document on the registration exercise in the form of a gazette to help it take a decision to participate in it or not.

“They sent us a letter on the 9th that the process will begin on 30th June and I responded to the letter that because the C.I. 126 was still under deliberation in Parliament, they should send us a gazette rather than a mere letter because the gazette will include the names of officers who will conduct the exercise and the exact location where the registration will take place,” he said.

Mr Mornah said the PNC would only take a decision to participate in the exercise if the EC responded to the letter it sent.

While corroborating what the party’s chairman said, Dr Mahama explained that the party was initially in favour of the registration, but upon a review at its meeting recently, it felt that the EC must provide more details on the exercise.

That, he said, would enable the party to take a position.