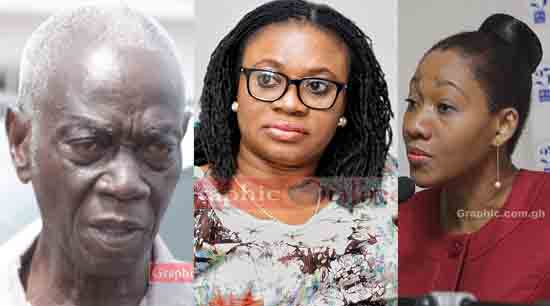 Think of this; Every Electoral Commission (EC) chair in Ghana since 1992 has been ‘in bed’ with the government in power.

Fifteen seconds after the announcement of a new EC, there is a dagger at their throat, held by the opposition.

The sharp-edged murder weapon remains till elections are over and it is found that the suspicion had been stranger to the reality, after all.

Some time in December 2012, there was an allegation that the EC was erasing the data on the biometric verification machines and resetting everything to zero, wiping off evidence considered vital to its intended case.

Subjected to strict proof, it was found that the erasure and re-setting did actually take place, but only in the imagination of the accuser.

In September 2011, at the time President  John Evans Atta Mills was extolling the virtues of the EC at the United Nations General Assembly in New York, the Chair, Dr Kwadwo Afari-Gyan, was under fire at home from the then largest opposition party warning of “dire consequences if the commission continued to ignore all promptings on the red flag hoisted by the party for the forthcoming biometric registration exercise”.

What could compel a politician to go on air to utter the following: “Let me be very honest. Should I see Dr  Kwadwo Afari-Gyan suffering to the point of death on my way, I will never convey him in my car to the nearest hospital. I am being honest. I worship with the Catholic Church, but I will never help Dr Afari- Gyan.”

That was (allegedly) Nana Obiri Boahen on Neat FM’s morning show, Ghana Montie. He is reported as saying: “We of the NPP are firmly convinced that Afari-Gyan’s position is untenable; he has lost credibility and public confidence so he must go.”

Years later, on February 25, 2016, hear Nana Obiri Boahen commenting on the conduct of the new EC chair, Mrs Charlotte Osei: “As for the present EC boss, she is a pale shadow of Dr Afari-Gyan.”

The NPP-Afari Gyan dance with death climaxed on December 31, 2012 when the party decided to go to court in what has gone down as one of the longest drawn out electoral wranglings in history.

A few days before the decision, representatives of the NPP presented evidence of election irregularities and malpractices to the EC. The submission was in direct response to an Afari-Gyan remark, insisting that, "The name of the game is evidence."

On June 16, 2015, Afari-Gyan exited. To him will be credited, forever, the advice to all politicians everywhere that “elections are won at the polling station”.

June 25, 2015: Enter Mrs  Osei, the new EC chair. She waded into a hail of bullets over the issue of a new voters register. For months, the opposition NPP and others had been pushing for the compilation of a new electoral roll, insisting the register “is bloated and therefore cannot confer credibility on the winner of the 2016 general election”.

But Charlotte Osei did not think so. She was certain that “the electoral system is robust and foolproof”. The ruling National Democratic Congress (NDC) issued a statement declaring that “the EC has done a yeoman’s job”.

On June 28, 2018, Charlotte Osei and her two deputies were removed from office following recommendations by a committee set up by the Chief Justice, Justice Sophia Akuffo into allegations of corruption and misconduct.

July 23, 2018:  President Nana Addo Dankwa Akufo-Addo appoints Mrs Jean Adukwei Mensa as the new EC Chair. July 24, 2018: The top news item in the morning was that “the opposition NDC has described Jean Mensa’s appointment as shocking, saying the appointment “defies all senses of decency, fairness and justice”. The party said it saw her mandate “only in terms of getting President Akufo-Addo re-elected”.

A few days later, Asiedu Nketia came waving a red flag. He said Jean Mensa was “a 'King Kong' who has come to change everything she met in the office”. This was his reaction to a disclosure by Mrs Mensa that “plans are underway to change the Israeli company, SuperTech Ltd (STL) from handling the data of the voters register.”

Then came Mrs Mensa’s first press statement. The EC was going ahead to compile a new voter roll.

Bam! On Thursday December 19, 2019, the NDC reacted, saying, the decision “is part of a plot by Jean Mensa to rig the 2020 polls in favour of President Akufo-Addo.

We’ve had three so far since 1992. What is there at the commission that makes every Minority suspect that there are daggers in their smiles?