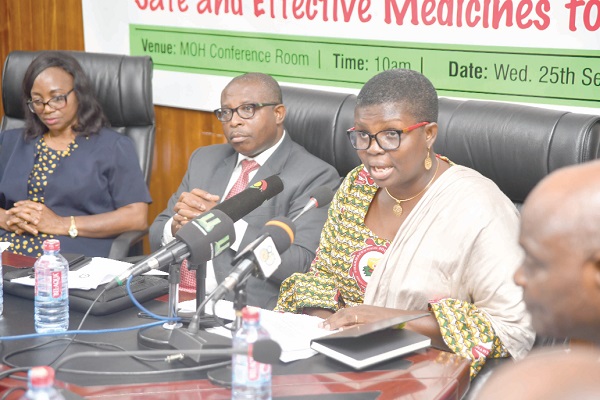 Ms Yvonne Esseku (right), Vice-President of the Pharmaceutical Society of Ghana, speaking at the launch of the World Pharmacy Day at the Conference Room of the Ministry of Health (MOH) in Accra. With her are Mr Alexander Abban (middle), a Deputy Minister of Health, and Ms Joycelyn Aziz, Chief Programme Officer, Pharmacy Unit, MOH

This year’s World Pharmacy Day has been launched, with an appeal to the government to expand the list of medicines that can be produced locally as part of measures to increase access to drugs and ease the pressure on the cedi.

“We live in a competitive world where every business is allowed to thrive. However, there is the need for the government to continue a deliberate national policy to promote the local manufacturing of pharmaceuticals,” the Vice-President of the Pharmaceutical Society of Ghana (PSG), Ms Yvonne Esseku, said at the launch of the event in Accra yesterday.

While commending the government’s decision to restrict 49 drugs for local manufacturers, she said there was the need to strategically invest in the local pharmaceutical manufacturing space.

In May 2017, the local pharmaceutical industry received a big boost following the government’s decision to ban the importation of 49 medicines which is reserved for local manufacturers.

Others are paracetamol syrup and tablets, paracetamol or codeine tablets, simple linctus syrup, Vitamin B complex tablets and multivitamin tablets (vitamins A acetate, B1, B2, B12, D3, nicotinamide, calcium pantothenate), Ibuprofen tablets and any cough mixture that contains carbocisteine diphenhydramine and guaifenesin or ammonium chloride as a single ingredient.

Ms Esseku urged the government to widen the scope since there was still a wide range of medicines that local companies could manufacture.

“We urge the government to consider expanding the list to include other molecules and some essential medicines, with particular emphasis on generic medicines for which more than five local manufacturers have the capacity to produce,” she added.

She said such a restriction of the importation of medicines would increase the market size for local manufacturers, improve their capability and capacity, reduce the exchange rate pressure on the cedi and also protect domestic health and safety.

Currently, there are 38 pharmaceutical manufacturing companies in the country, with 210 other companies mainly into the importation of medicines, in an industry estimated to be worth GH¢1.18 billion in 2015 and GH¢1.36 billion in 2016, according to statistics from the Ghana Chamber of Pharmacy (GCP).

According to the GCP, the local manufacturing industry produced only 30 per cent of the country’s medicinal needs, with a little over GH¢900 million going into importing medicines.

“Pharmacists are the most qualified and competently placed professionals to ensure the effective dispensing of medicines in all healthcare facilities,” she said.

A Deputy Minister of Health, Mr Alex Kwadwo Abban, said pharmacists had a very important role to play in addressing some evolving threats of anti-microbial resistance, the fake medicine menace, substandard medicines, substance abuse, among others.

“I charge all pharmacists to critically examine the various roles they play in the value chain to ensure that safe and effective medicines are available to all,” he added.