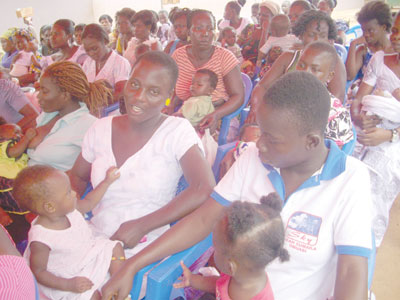 Speaking at a sensitisation durbar organised by the Ejisu-Juaben Municipal Directorate of Ghana Health Service (GHS) in collaboration with the Ejisu-Juaben Traditional Council, Mrs Amponsah-Koduah, said using such concoction could lead to premature death and also cause permanent damage to their womb.

The durbar, funded by the Centre for the Development of People (CEDEP), brought together over 200 nursing mothers most of whom were between the ages of 14 to 30.


She described as alarming cases of teenage pregnancy recorded in the Ejisu-Abenase community, which equally led to alarming cases of unwanted abortion, and therefore appealed to parents, religious groups and all stakeholders to support the GHS to educate the youth to desist from premarital sex and concentrate on their education.

She said another alarming situation was the fact that most junior high school pupils in the community were sexually active, adding that some of them have even started patronising family planning services to prevent them from getting pregnant while in school.

Madam Mercy Agyemang, a Senior Staff Midwife at the Ejisu Government Hospital, said the durbar was aimed at sensitising the girls in the area to the dangers on premarital and unprotected sex and urged them to stay away from such acts.

She said there was the need for parents in the community to ensure that they monitored and supervised their children to know what they do during their leisure hours to avoid them getting into contact with their peers who may misinform or influence them to get involved in such negative practices.

She educated the gathering on the various family planning methods and urged them to seek professional advice from the appropriate quarters to avoid problems related to maternal health.

Nana Akua Konadu, Asotwe Mbabaawa Hemmaa, who was the Guest of Honour at the durbar said, the Ejisu Traditional Council would continue to collaborate with the Municipal Directorate of Health Service to put in place the right programmes to support the development of the lives of the people.