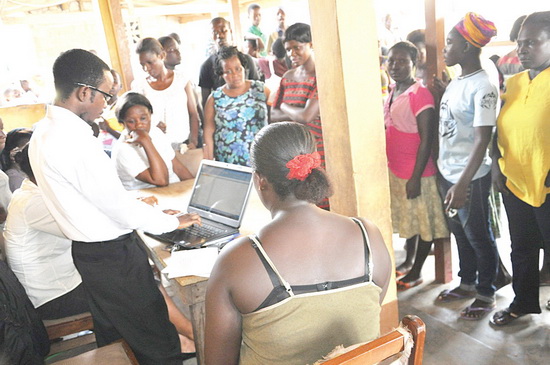 Some of the 223 people in the Cape Coast Metropolis going through the registration process with the National Health Insurance Scheme through the magnanimity of the National Lotteries Authority, (NLA) at Brofoyedur.
The beneficiaries included 99 persons from Brofoyedur, 177 from Kedadwen and 157 from Siwdu Compound.

The Central Regional Accountant of NLA, Mr Daniel Bediako, said it was part of the NLA’s corporate social responsibility to give back to society.

He said health was important for the well-being of the people, noting that the registration would give the beneficiaries access to healthcare.

The assembly member for Brofoyedur, Mr Peter Cooke-Arhin, who expressed  gratitude to the NLA, said the people were financially handicapped and therefore could not register with the scheme because they were mostly fishermen whose trade was seasonal.