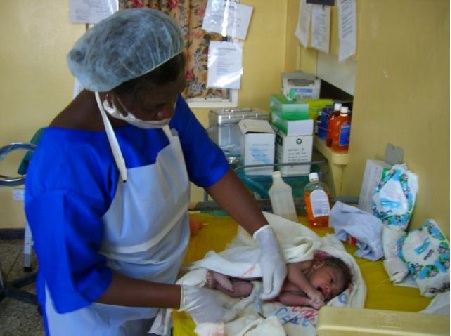 Advocates of Mamaye Ghana, a campaign that seeks to improve maternal and newborn survival in sub-Saharan Africa, have called on the Ministry of Health to urgently address the shortfall in the number of midwives in the country to enhance safe delivery by pregnant women.

According to the State of the World’s Midwives report, Ghana has a shortfall of 29 per cent of the number of midwives required annually to support safe delivery by pregnant women in the country.

According to a report  titled The State of the World’s Midwifery 2011: Delivering Health, Saving lives, published by the United Nations Population Fund (UNFPA) and the World Health Organisation (WHO) Global Atlas of the Health Workforce,  there were an estimated 3780 midwives, nurse-midwives and nurses with midwifery competencies in Ghana in 2008.


Health experts say if all Ghanaian women had access to the services of midwives, the lives of about 2000 mothers and 15,500 babies could be saved by 2015.

The advocates of Mamaye Ghana, a campaign initiated by Evidence for Action (E4A), a non-governmental organisation (NGO), noted that midwives played a vital role in supporting women in the course of their pregnancy, in the management of complications during childbirth.

“We applaud the government’s commitment to strengthen its free maternal health policy, but more needs to be done to expand this critical workforce,” a spokesperson for the Mamaye Ghana campaign, Professor Richard Adanu, was quoted to have said in a statement issued to mark the International Day of the Midwife.

The International Day of the Midwife, which is observed on May 5, is an occasion used to highlight the significant role midwives play in the health delivery system.

“It is right that we honour our midwives on International Day of the Midwife. We are inviting Ghanaians to show their appreciation of midwives, and help inspire our youth to become midwives in the future.

“You can do this by tweeting a ‘thank you’ message for their hard work or uploading your photographs of support to our Facebook page, or perhaps send us a picture of an inspirational midwife from your community,” the statement indicated.

The International Day of the Midwife is marked on May 5 worldwide to renew the commitment of midwives and to remind them of the importance of the service they render.

It is also to draw public attention to the difficulties facing midwives and how best those problems could be solved.

The ‘International Day of the Midwife’ is marked worldwide to first of all, renew the commitment of midwives around the world and to remind them of the importance of the service they render to families living everywhere.

One other crucial reason for the commemoration of the day is to draw the general public’s attention to the difficulties facing midwives and the best way to help solve these problems for the good of all.

As part of the World Health Organisation’s (WHO) goal to push for the training of more midwives, since 2011, the International Confederation of Midwives (ICM) has marked the occasion on the theme: “The World needs midwives today more than ever.”