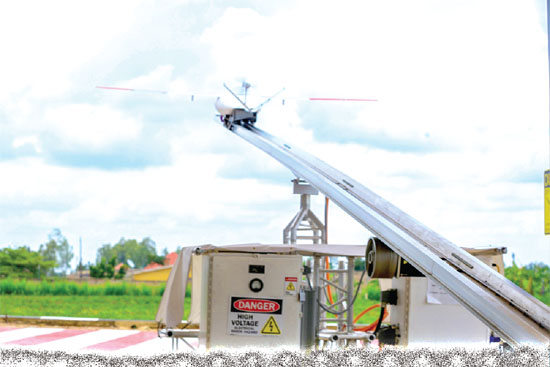 A drone (arrowed) taking off from a launcher to deliver blood. This service will be free for patients and medical facilities Follow @Graphicgh

to the Director-General of the Ghana Health Service (GHS), Dr Anthony Nsiah-Asare, when the project to deliver medicines and blood through drones begin by the second quarter of the year, the cost of deliveries will be sorted by the state as part of plans to reduce the cost of health service delivery in the country.

Answering questions about who is likely to bear the cost of medical deliveries through drones in an interview with the Graphic Business in Accra at the weekend, Nsiah-Asare said the government had been emphatic on who would bear the cost and was determined to carry it out per its plans.

He explained that monies raised for the project would also come from corporate institutions as part of their corporate social responsibility (CSR), adding that “those companies will be rewarded as usual through tax rebates, among other things, to enable them to do more as their CSR activities demand.”
“What we should also know is that the project is a purely Public Private Partnership (PPP) project”, Nsiah-Asare said.

In the second week of December last year, Parliament approved the drones for medical delivery after three failed attempts. It is estimated that the government is likely to spend about $12 million in four years for the project.

The Ghana Health Service (GHS) had introduced the deal to help deliver blood and essential medicines across the country, especially to rural communities.

The GHS had held that the deal was extremely useful and called on all Ghanaians to support the project.

According to the Director-General, the introduction of the drone services was part of a grand agenda to transform the health service and to also use more means in meeting the health needs of the people.

“Through the drone deliveries, we will have areas which are underserved have supplies because once they make the request, the drones will fly with their specifications to meet the demand of their patients”, he said.

Nsiah-Asare also explained that the project would also prevent overstocking of medications in one hospital, a phenomenon which costs the state so much money when the medicines eventually expired.

He said for instance that the CHIP did not have adequate storage facilities per their design and therefore, they would be major beneficiaries of the service.

He said because the drones would be available all day, hospitals and health facilities would be supplied as and when they needed them to avoid wastage in the system.

Again, he noted that the government was not going to spend any money the acquisition of drones for the service.

He said the company, Zipline, would be the owners of the drones, and that they would deliver only on request and paid per every delivery.

In terms of job creation, he said the project had been designed to accommodate a number of people from different backgrounds.

They include pharmacy technicians, nurses, pilots and technicians of all sorts, adding that just like what was practiced in Rwanda, all the workers would be Ghanaians.

Nsiah-Asare said the construction works ongoing and when done, the first pilot phase would begin after which a full service would begin.

He said the project would first serve areas within the Eastern Region, including all of the Afram Plains, Volta Region, parts of Greater Accra and the Ashanti Region.

He said there would be three other to serve the rest of the country in due course.