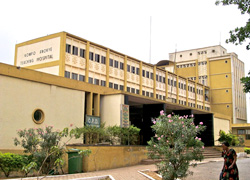 The Komfo Anokye Teaching Hospital (KATH), Ghana's second largest hospital, is facing the biggest challenge in its 59-year history, with the ongoing strike embarked upon by medical doctors virtually reducing it into a ghost facilty.

Patients on admission at the hospital as of Monday, April 29 were 468.

Of the number, the Accident and Emergency Centre had 44 patients, while the Mother and Baby Unit had 73.  Traditionally, the two take the highest number of patients at any particular moment.

The rest were spread among the various wards.


On the average, admission figures at the hospital at any moment is 800, but at its peak it could jump to 1000.

The drastic reduction has been due to the intensity of the doctors’ strike, the worst being the withdrawal of emergency services, which has resulted in the hospital suspending new admissions.

A visit to the hospital by The Mirror on Monday revealed that the promise by the Ministry of Health to send retired doctors to the hospital to fill in some of the gaps left as a result of the strike action had not been carried out.

Indeed, there was no immediate sign this was going to happen soon.

All the patients currently on admission were brought there before the Ghana Medical Association (GMA) activated the second phase of the strike action last week.

A source at the hospital said “the strike action is seriously biting us here and we pray it is resolved soonest.”

In front of the accident and emergency centre, the usual large number of people who throng there every day was absent.

Just about 20 people were seen in front of the imposing facility.

The source said the situation KATH found itself was very different from the smaller hospitals.

It said in the first and second-tier hospitals, nurses and medical assistants could easily come in to support.

“Here at KATH, every medical attention is doctor-led. That is why the strike action is so severe here,” it said.

The Mirror was told by a witness of how two patients who were brought in critical condition earlier in the morning of Monday, April 29, 2013 were turned away because there was no doctor to attend to them.

Unconfirmed reports said one of them died later.

The situation was not better at the Komfo Anokye Polyclinic. Every activity had virtually ground to a halt.