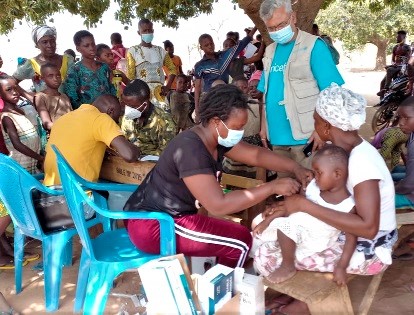 The Ghana Health Service is embarking on a five-day Yellow Fever Preventive Mass Vaccination Campaign (PMVC) to immunise the public against the disease in selected regions across the country.

Over 420,000 persons between the ages of 10 and 60 years are being targeted to be vaccinated in nine regions.

The exercise, which is the second phase of the nationwide campaign, began on Saturday, February 26, 2022, and is expected to end today.

The first phase of the exercise was carried out in December last year following the outbreak of the disease in the Savannah Region and other parts of the country.

A team of health officials and volunteers have been deployed to various designated areas in the various districts to administer the vaccines.

A team of officials from UNICEF has also been deployed to monitor the exercise and provide technical support to ensure the success of the exercise.

In the Savannah Region last Sunday, the exercise was orderly and attracted a high turnout.

The Bole District Health Director, Hajia Fuseina Sulemana, said the exercise would help to reduce the number of unimmunised children, and provide life-long protection to persons who would be vaccinated.

She said the vaccine was safe for all because nobody had ever taken it and complained of complications, and urged the public to come out in their numbers to get vaccinated.

"Nobody has complained of any side effects before; the vaccines are safe because the children have been taking it with other vaccines over the years," she said.

Hajia Sulemana indicated that after the five-day vaccination campaign, a mop-up exercise would be conducted in all the beneficiary districts to ensure that all eligible persons were covered.

The Chief Field Officer of UNICEF, Tamale Office, Bhanu Pathak, who led a team to monitor the vaccination campaign, expressed satisfaction about the exercise.

“The way the community members are trying to get vaccinated means that a lot of them are well informed about the exercise," he said.

"We are happy that we are able to reach out to people in the hard-to-reach areas where about 60 per cent of the cases were recorded last year.

“Our collaboration with the Ghana Health Service (GHS) is positive," he added.

He said UNICEF was collaborating with the GHS to ensure that everyone, particularly children and vulnerable groups, were vaccinated against the disease.

The exercise, Mr Pathak noted, would also accelerate the country's progress towards eliminating Yellow Fever by 2026 under the Global Strategy to Eliminate Yellow Fever Epidemics (EYE).

Some of the community members who spoke to the Daily Graphic after taking the vaccine expressed appreciation to the GHS and UNICEF for ensuring that they were vaccinated against the disease.

A resident of Jentige, Ms Gbabere Afia, said: "All my children have been vaccinated, and there is no side effects, so the vaccine is safe".

In October 2021, the Savannah Region reported the first suspected cases of Yellow Fever.

The disease later spread to about 13 of the 16 regions, resulting in the death of over 40 people, with 852 confirmed cases recorded.
Yellow Fever is an infectious disease caused by a virus transmitted to humans by the bites of infected aedes mosquitoes.

The mosquitoes either breed around houses (domestic), in forests or jungles (wild), or in both habitats (semi-domestic).

Once a person contracts the disease, the virus incubates in the body for three to six days.