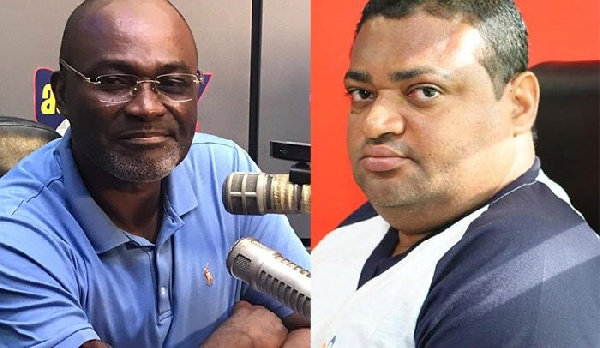 A member of the National Democratic Congress (NDC), Mr Joseph Yammin has filed a defamation suit against the Member of Parliament for Assin Central, Kennedy Agyapong and Ken City Media Limited for publishing defamatory statements which he says portray him as a criminal.

According to Mr Yammin, the said publication exposed him to "public ridicule, hatred and contempt in the eyes of the right-thinking citizens of Ghana and numerous expatriates and diplomats in Ghana."

Mr Yammin, who served as a former Deputy Minister of Youth and Sports and Deputy Ashanti Regional Minister is seeking damages of GH¢95million and an order from the courts directed at the defendants to retract the said publication on the second defendant's airwaves for three times a day for a year.

He is also seeking an order restraining the defendants from publishing further falsehood against the plaintiffs.

Per the plaintiff's statement of claim, on May 14 the first defendant (Kennedy Agyapong) falsely accused him of conspiracy to commit series of murders to destabilise the country on the second defendant's media airwaves (Oman FM).

The statement of claim also avers that Mr Agyapong said the plaintiff used to beg for food as a student at Prempeh College.

Mr Yammin contends that the said stories published by the defendants are "vexatious, total fabrication and have exposed the plaintiff to hatred, ridicule and contempt".

He said the publications have also caused him financial distress as his clients have refused to have anything to do with his farming business.

"The Plaintiff avers that the acts of the defendants have not only lowered him in the esteem of his fellows and seriously injured his hard won reputation, but it has also exposed the plaintiff to public hatred and contempt to the extent that, his life and that of his family is in danger. The Plaintiff rather contends that the said publication has caused him serious emotional stress," the statement of claim averred.