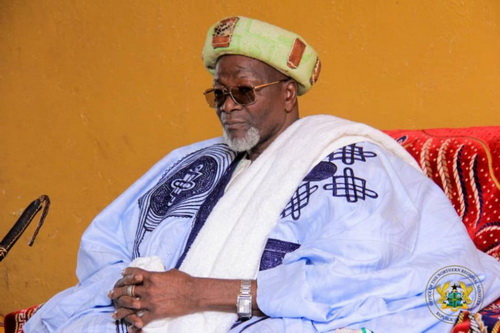 The National Road Safety Commission (NRSC) has conferred a title, Road Safety Goodwill Ambassador on the Overlord of Dagbon, Yaa-Naa Abukari Mahama II, which will make him an advocate for safe road usage.

The title was conferred on the Yaa-Naa at a ceremony in Yendi, the traditional seat of Dagbon in the Northern Region last Thursday by the Board Chairman of the NRSC, Rev. Ismaila Hasmilton Awudu.

The chairman explained that the conferment of the Goodwill Ambassador on the Yaa-Naa was part of the strategy by the NRSC to help influence the thinking and attitude of people towards behavioural change to stop the rising carnage on the roads.

He said the commission deemed it important to employ the voices and faces of noble people to back the campaign.

Rev. Awudu said as one of the agencies in the transport ministry, the NRSC had established and built strategic partnerships with many well-meaning Ghanaians and also conferred on them Road Safety Goodwill Ambassadors to advocate safe road practices.

He said the deaths recorded daily in road accidents were more than those from violent crimes.

Out of 6,844 road traffic crashes recorded as of the end of June in the country this year, 1,252 people lost their lives, while 7,043 were injured.

“There has always been a gap in resources and capacity constraints, as well as low levels of commitment from duty bearers. The government is concerned with the situation and it is, therefore, committed to building the capacities of relevant agencies to deliver on their mandates,” the chairman added.

He also appealed to the Yaa-Naa to assist the police to enforce the use of crash helmets by both motorbike riders and pillion riders and to ensure adherence to traffic regulations to save lives.

The Executive Director of the NRSC, Mrs May Obiri Yeboah, said as an ambassador, the commission encouraged the Yaa-Naa to advocate safety on roads nationwide and everywhere and not limit his royal role to only the Dagbon kingdom.

She said in the first half of this year, 91 people lost their lives in road traffic crashes in the Northern Region.

“Your majesty, if we have to reduce this number of deaths on our roads, especially with motorcycles where people do not conform to the rules and regulations of wearing crash helmets, and to also avoid overloading, we will need you to help us lead the advocacy,” Mrs Yeboah added.

In his acceptance speech, the Yaa-Naa pledged to support the campaign to ensure safety on the roads.

He, however, called for the strict application of the law to allow for only people with the requisite licences and roadworthy vehicles to ply the roads to help reduce the growing number of accidents in the country.