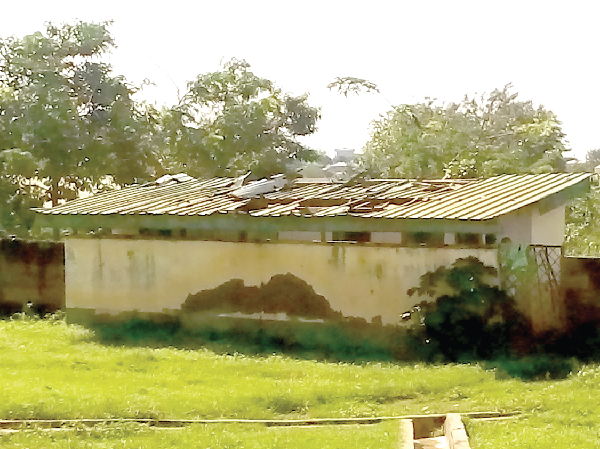 The female KVIP toilet, which serves over 2,300 female students

As Ghana joins the rest of the world to mark World Toilet Day today, on the theme: “Valuing toilets”, female students of the Oyoko Methodist Senior High School (SHS) in the Eastern Region have appealed for a decent toilet for their use in the school.

The United Nations is seeking to use the day to draw attention to the fact that toilets are under-funded, poorly managed or neglected in many parts of the world, a development that has devastating consequences for people and the environment, particularly in the poorest and most marginalised communities.

On the compound of the Oyoko Methodist SHS, the only female KVIP toilet, which serves over 2,300 female students, both day and boarding, is in a bad state.

The roof of the toilet, for instance, leaks badly anytime it rains, making the place flooded, a situation which prevents students from accessing the place.

Again, the students said the toilet emitted a foul smell.

Some of the students who spoke with the Daily Graphic on condition of anonymity alleged that using the toilet had resulted in a number of female students being infected with candidiasis.

According to them, the state of the toilet posed a health threat to students and, therefore, needed immediate attention to avert a potential disease outbreak.

They indicated that they normally removed their uniforms before entering the toilet and put them on after using the place to avoid any unusual smell in class.

Another major challenge over which they lamented was the frequent sight of snakes and scorpions around the toilet, putting fear in them.

The acting Girls’ Prefect of the school, Ms Abigail Oye, told the Daily Graphic that the structure had become very weak and could crumble anytime if nothing was done about it.

She indicated that several efforts to get the authorities of the school and the Ghana Education Service to remedy the situation had been fruitless.

Reaction
When the Daily Graphic reached the Headmaster of the school, Mr Frank Ayiah, he said efforts were being made to have the toilet fixed.