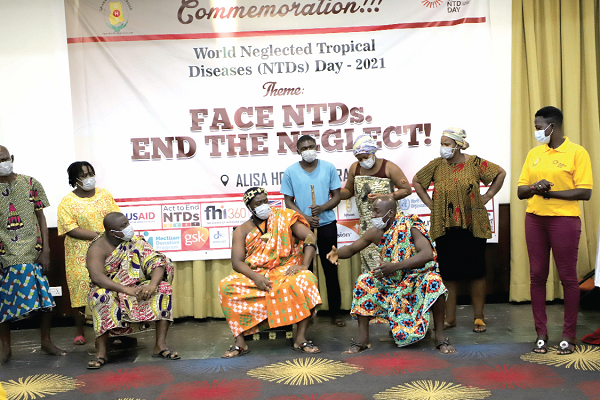 Members of the Abibigromma Theatre in a sketch on Neglected Tropical Diseases during the event. Picture: EDNA SALVO-KOTEY
30.5k Shares

Speakers at this year’s World Neglected Tropical Diseases (NTDs) Day celebration have called for the strengthening of partnerships to control and eliminate NTDs in the country.

The event, which was commemorated in Accra yesterday, was on the theme: “Face NTDs. End the neglect.”

It was jointly organised by the Ministry of Health and the Ghana Health Service (GHS). The day is observed worldwide on January 30 every year.

According to the speakers, NTDs were among the major causes of poverty in the country that were affecting livelihoods and national development.

They added that just as the coronavirus disease (COVID-19) was impacting negatively on productivity and businesses, NTDs, which they said had not been given much attention, equally had a negative effect on the social and economic development of the country.

The speakers were the Minister designate for Health (MoH), Mr Kwaku Agyeman-Manu, the Director-General of the Ghana Health Service (GHS) Dr Patrick Kuma-Aboagye, and the ambassador for NTDs in the country, Ms Joyce Aryee.

Mr Agyeman-Manu, who was represented by the Director of Technical Co-ordination of the MoH, Dr Mrs Martha Gyansa-Lutterodt, called for more action and investment in the eradication of NTDs.

She said the commemoration of the event was significant, as it created the platform to sensitise the public and also bring stakeholders together to deliberate and strategise on ways to eliminate NTDs.

In a speech read on his behalf, Dr Kuma-Aboagye said some of the surest ways of preventing and controlling NTDs were chemotherapy, case management, health education and awareness creation.

He said the country had at least two NTDs in every district which although did not kill people, had debilitating effects, including severe disfigurement, disability and blindness on them.

“Ghana has about 14 NTDs that are managed by respective programmes under the GHS.

He added that the diseases, beyond condemning people to disability, also stigmatised them, driving them out of their community and placing a financial burden on their households.

The director-general, therefore, called for mainstreaming of NTD interventions into Universal Health Coverage to scale up transmission-breaking interventions.

He also encouraged stakeholders to integrate approaches in NTDs’ control for simplification, cost-effectiveness and efficiency.

He, however, said through the effort of the GHS and stakeholders, the country had been able to eliminate trachoma, which was currently under post-elimination surveillance.

For her part, Ms Aryee entreated development partners to continue to support NTDs’ programmes to help eradicate the disease from the country.
She said their elimination would ensure that no one was left behind in sectors such as education and health care.