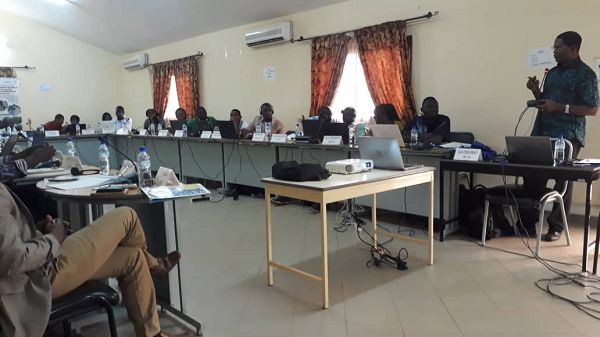 A cross section of journalists at the opening ceremony of the workshop on integrated drought and flood management
30.5k Shares

A three-day workshop on droughts and floods management in the West-Africa sub-region for journalists has begun in Ouagadougou in Burkina Faso.

The workshop, themed :”Integrated drought and flood management: Contribution of the media in advocacy and awareness-raising in West Africa”, is organised by the Global Water Partnership West Africa (GWP-WA).

It is aimed at equipping the journalists with relevant information and a proven approach towards the management of droughts and floods in West-Africa.

The workshop is also aimed at providing a framework for exchanges between the media, local communities, institutions and partners on good practices in drought and flood prevention and management in the sub-region.

In his opening remarks, the Executive Director of the Volta Basin Authority, Mr Robert Dessouassi, said it was imperative for the media to be armed with the needed information to enable them to help raise awareness on current climate effects and challenges which have led to increased droughts and floods in the West African sub-region.

He noted that although issues of droughts and floods could not be prevented as they were natural occurrences, being equipped with information on the success stories of other regions could help mitigate if not eliminate the effects.

Mr Dessouassi, therefore, urged the participants to form a network of media actors, aimed at information sharing so as to help raise awareness in their respective countries.

The Executive Director of the GWP-WA, Mr Armand Houanye, noted that the effects of climate change was evident as already vulnerable populations have been rendered homeless as a result of floods in the sub-region.

He noted, however, that the occurrences of floods could be to the advantage of countries if it is properly managed.

He explained that if governments put in proper mechanisms to manage the occurrences of floods, it could help achieve the Sustainable Development Goals 2, 6, 7, 13, 15 and 17.

He, therefore, urged the participants to take advantage of the opportunity that the workshop provides  to equip themselves with the needed information to help create awareness and assist their respective governments in building relevant mechanisms to help address the issues of droughts and floods in the sub-region.