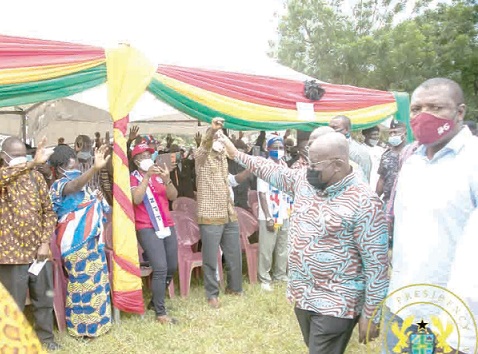 President Nana Addo Dankwa Akufo-Addo has expressed the government’s resolve to continue its fight against illegal mining, sand-winning and other activities along the country’s water bodies to protect and improve the quality of water supply.

He said such illegal activities were not only affecting water sources but also having a negative impact on the environment.

He said so far the effort by the government was yielding some results, adding: "I am glad to hear from the Minister of Sanitation and Water Resources that the quality of water in some important rivers, such as the Pra and the Tano, is beginning to improve — we have to continue the fight."

President Akufo-Addo was speaking at a durbar of the chiefs and the people of Wenchi in the Wenchi municipality in the Bono Region.

He had earlier cut the sod for the commencement of work on the Wenchi water supply project as part of his two-day working visit to the region, which ended last Saturday.

The project involves the construction of a 13-kilometre transmission pipeline, a 50-kilometre distribution pipeline and a kilometre of raw water pipeline.

Other components are a 1,800 cubic elevated water tank to be located in Wenchi, an intermediate booster station and an 870 cubic metre ground level tank.

It will also have a 10,700 cubic metre water treatment plant expected to produce 2.4 million gallons per day and an 11,100 cubic metre intake facility.

Upon completion, the project is expected to serve 92,425 residents.

Currently, the source of water is a mechanised borehole that supplies water to only Wenchi.

President Akufo-Addo said the government was also working towards the construction of more water projects in various parts of the country to help attract investors to those areas to create jobs for the people.

The President attended durbars at Duayaw Nkwanta and Techimantia in the Tano North District and the Tano South municipality, respectively, last Saturday, where he reaffirmed his determination to ensure a peaceful December 7 general election.

According to him, there was the need to sustain the prevailing peace and stability in the country, saying: "An election is not about fighting, but sharing of ideas.”

The chiefs at the various durbars assured the President of their support in his bid for a second term.

The Paramount Chief of the Duayaw Nkwanta Traditional Area, Nana Boakye Tromo III, said: “You have distributed the national cake equitably and we in Duayaw Nkwanta have got our fair share of development.”

“I want you to know that we are solidly behind you. We are told chiefs are not supposed to engage in partisan politics. However, it gets to a point in time when you have to help the person who helps you in your time of need. We are solidly behind you and declare: ‘Four more for Nana — four more to do more’,” he said.

At Techimantia, the Krontihene, Nana Ampong Koromantan, prayed to God for long life, good health and strength for the President.

“Today, we just want to tell you that we in Techimantia will never forget you for the construction of the Bechem-Techimantia-Akomadan road. Indeed, the presence of many of the town folk at this durbar testifies to the fact that we have already accepted you as one of us. It is four more for you,” he added.

For his part, the Bechemanhene, Nana Fosu Gyeabuor II, expressed the gratitude of the chiefs and the people of the area to the President and the government for the construction of a business resource centre (BRC) in the area.

“Very soon, we shall go to the polls, and if you look at this beautiful building, residents of Bechem do not need to be told about what has to be done. It is up to them. They know what to do,” he said.