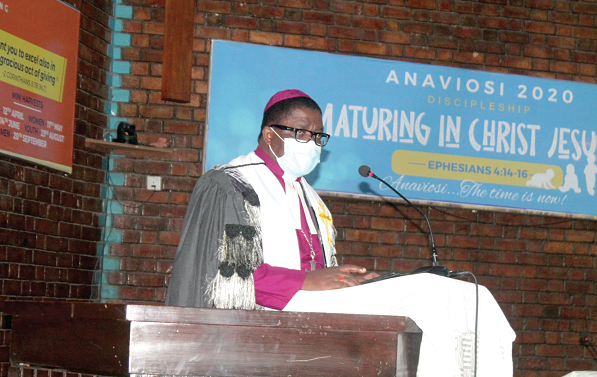 The Christian Council of Ghana (CCG) has said it will sanction churches that fail to adhere strictly to COVID-19 protocols prescribed for churches in the country.

It said since churches and other religious groups had been permitted to hold events within prescribed protocols, it was imperative that it ensured compliance to help contain the spread of the pandemic, which is said to be on the rise.

This was contained in a statement signed by the Chairman of the CCG, who is also the Presiding Bishop of the Methodist Church of Ghana, the Most Rev. Dr Paul K. Boafo, in Accra.

“As we have done with distinction in the past, we urge all churches and church leaders to adhere strictly to the COVID-19 protocols to help curb the spread of the virus,” it said.

The protocols include a maximum two-hour service, one-metre social distancing, wearing of face masks, hand-washing under running water and soap, the use of sanitiser and disinfection of surfaces.

“Any church that does not comply with the protocols will be closed down and the leaders sanctioned according to the Executive Instrument,” it said.

While a source at the CCG told the Daily Graphic that the directive applied to all churches, the Ghana Pentecostal and Charismatic Council (GPCC) and the National Association of Charismatic and Christian Churches (NACCC) could not say if it also applied to one-man-run churches which often disassociated themselves from the activities of the CCG and other such recognised bodies.

“As the leadership of the church in Ghana, our caution goes to all who operate as churches; so it applies to all. Also, given the threat the second wave is posing, it is the wisest and most considerate thing to do in order not to jeopardise the lives of members of the church, their families and communities.

“All we are doing is re-emphasising the need to adhere to the protocols we have been observing since church services resumed in September last year. We also caution that any individual or groups of people who disregard the protocols in the name of worship will be dealt with as stipulated by law,” it further said.

The statement said under the current arrangement, marriages and burial services were allowed in churches, but explained that receptions and celebrations of any form were not allowed.

“Marriages and burial services which are held in churches under strict COVID-19 protocols are permitted; however, the celebrations such as receptions, parties, dancing, eating, among others, have been banned.

“The burial or interment itself must be private, which means it must be limited to 25 people,” it added.

As part of measures to halt the spread of the COVID-19 pandemic since the first case was recorded in the country in March 2020, President Nana Addo Dankwa Akufo-Addo placed a ban on all social, public and religious events.

In anticipation of easing the restrictions, the leadership of the CCG presented some proposals to the President, outlining the safety precautions the churches had put in place to make their places of worship safe.

In September 2020, the ban was eventually eased and the churches and other religious bodies asked to strictly observe the protocols.

They included the provision of facilities for hand-washing, the registration of churchgoers to allow for contact tracing, the checking of temperature, as well as ensuring social distancing in seating arrangements.

Also, the churches were required to have isolation centres and COVID-19 teams to sensitise their respective congregations to the disease.