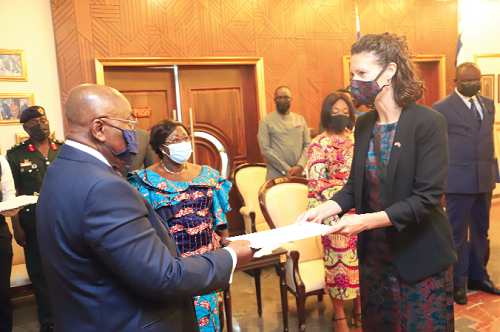 President Nana Addo Dankwa Akufo-Addo has said that in spite of some few incidents of instability in West Africa, Ghana is determined to maintain the integrity of its democratic institutions and continue down the path of democratic engagements.

The President gave the assurance when he received the credentials of the new UK High Commissioner to Ghana, Ms Harriet Thompson, at the Jubilee House in Accra last Tuesday.

At different intervals, four other envoys from Nigeria, Germany, The Netherlands and Spain also presented their credentials.

The envoys were received at the forecourt of the Jubilee House where they mounted a dais and paid compliments to the playing of their national anthems and that of Ghana by the Ghana Police Band.

They were ushered into the Ceremonial Room by the Director of State Protocol, Mr Yaw Kumah, where President Akufo-Addo, the Chief of Staff, Mrs Akosua Frema Osei-Opare; the Minister of Foreign Affairs and other government officials were waiting.

President Akufo-Addo said as the Chairman of ECOWAS, he was deeply worried about issues of instability in the region but expressed confidence that solutions would be found to them, and that the commitment of the regional bloc to democratic governance would be realised.

The new UK High Commissioner noted that the world was living in turbulent times with the COVID-19 pandemic, the urgency of climate change and the political changes happening across the world, “but throughout the turbulence, Ghana has held strong to its values of tolerance, inclusion and diversity”.

Ms Thompson said the UK was shifting the development that it provided from the provision of aid to investment and build on existing trade links between the two countries. 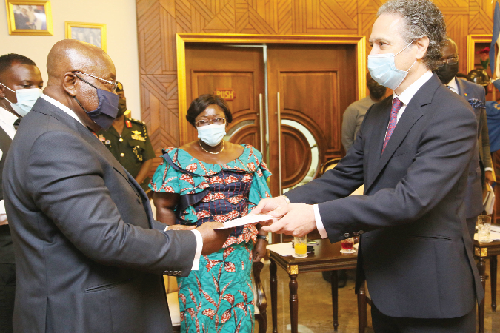 The Nigerian High Commissioner, Vice-Admiral Ibok-Ete Ekwe Ibas, acknowledged the courtesies and privileges Ghana had been offering Nigerians in Ghana and commended Ghana for the brotherliness between the two countries.

He noted that he was in Ghana to consolidate the closer bonds, saying the two leading nations in West Africa shared security challenges of piracy, illicit trafficking of small arms and weapons, terrorism and cyber crimes.

He expressed the hope that ongoing bilateral and multilateral efforts would continue to deal with the challenges.

Responding, President Akufo-Addo said Ghana’s relations with Nigeria were the most important of the countries of the world.

He described the two countries as the strongest democracies in the region, saying they were collaborating in the fight against terrorism and unconstitutional changes.

The German Ambassador to Ghana, Mr Daniel Krull, said Germany’s confidence in the capacity of President Akufo-Addo to handle both internal and regional matters was very great, “given your important role in the ECOWAS”.

President Akufo-Addo described Germany as a model country for the development of nations, especially in the areas of democracy, prosperity and wealth.

The Spanish Ambassador, Mr Jose Javier Gutierrez Blanco-Navarrete, said Spain considered Ghana as a strategic partner in West Africa because they both shared values of democracy and respect for human rights.

He commended Ghana for promoting integration and stability, as well as development in Africa, and gave assurance of the Spanish government’s determination to help AfCFTA succeed.

President Akufo-Addo said Ghana would like to have more Spanish companies investing in the country, and expressed the hope that they would see progress in the ties between the two nations.

Tracing the history of Ghana and The Netherlands, the Ambassador, Mr Jeroen Verheul, said he recently read that 320 years ago, one of his predecessors had presented his letters of credence to the then Asantehene, Osei Tutu I,  “and it struck me that the message he brought at that time was very similar to what I bring, and that is to promote economic relations in the region and also between our two countries”.