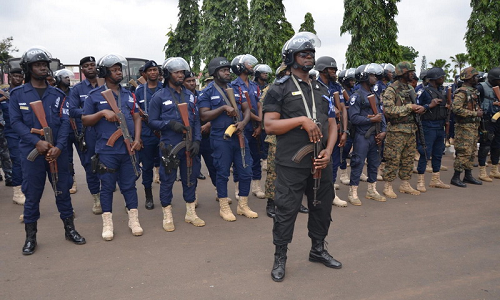 The Accra Regional Police Command has issued a stern warning to criminals, reminding them that they are being watched.

The deployment, he said, was a move by the command to fight crime during the festive season.

“The festive period is all about spending quality time with one’s family, friends and loved ones. But we know some individuals will choose to commit crime and I am sending to them a warning that the police is nearby and will not spare them if they cross the line.

“We are committed to tackling crimes and ensure that people go about their activities feeling safe and assured of their safety. Our officers work 24 hours a day and are dedicated to ensuring that the public does not fall prey to crime this Christmas. We will arrest and prosecute anyone found responsible for any form of criminal activity,” he said.

As a means to keeping themselves and their families safe, Mr Boakye Yiadom urged the public to be alert during this festive season.

“People are out shopping, attending parties and visiting friends and family. You have to lock all your doors and windows. Also when you are out shopping you have to be careful of pickpockets and other criminals,” he said.

To improve the safety of the people and prevent holiday-related crime, he said the regional police command would deploy extra policemen to densely populated areas and commercial centres in the city, such as markets, beaches and shopping centres.

He said there would be policemen also stationed at bus terminals, banks, churches and vital installations.

The goal, he said, was to make the holiday period more secure and to prevent crime from being committed by thieves and particularly vehicle snatchers.

“We are on foot and mobile patrols day and night especially in the markets since these places have had many fires in the past week. We will also be monitoring areas prone to crime and in places where land guard activities are rife. There will be increase in police visibility as well as night patrols and snap checkpoints,” he said.

The Accra Regional Police Commander said on Christmas Day and New Year’s Day, there will be massive deployment of policemen in areas of the city under his authority.

“We are drawing men from all divisions and districts for Christmas duties. Every division will have its Christmas duty plan such that all the 14 divisions under the command will have specific duties outlined for the season,” he said.

To deal with the activities of land guards, he said all divisional police commands in Accra had been tasked to form special patrol teams to go after the villains.
In addition, he said, there would be policemen that would patrol on motorbikes to check crimes such as bag snatching, for example.

Mr Boakye Yiadom said the command had observed that because many people travelled to their hometowns during such occasions, there was an unusually high number of road accidents.

He said as a result, in their rush to make good money, commercial drivers sped on the roads and consequently flouted road traffic laws, leading to road accidents.

Other factors that led to road accidents, he added, included drivers who drove under the influence of alcohol, drove tired and drove beyond speed limits. He, therefore, urged drivers to take note of these flaws and ensure they did not fall foul of the law.

He further cautioned drivers who were driving around using trade licence plates to observe the laws governing their use and obey road traffic regulations.