We can feed nation if resourced — Award winners 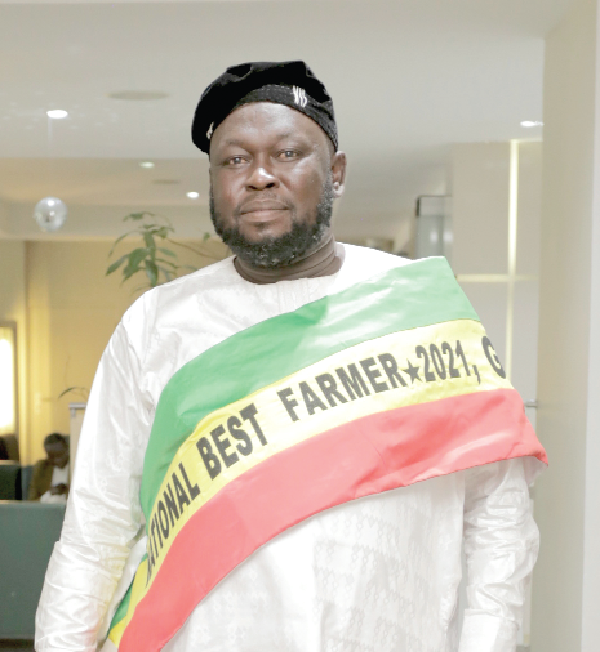 Some winners at the 37th National Farmers Day Awards say they can feed the nation and ensure food safety if there is adequate investment in agriculture.

They have, therefore, called for investment in more efficient agricultural systems to increase productivity and reduce food importation.

The National Best Farmer for 2021, Alhaji Mashud Mohammed, in an interview, said irrigation systems, machinery and improved seedlings were necessary if farmers were to significantly increase productivity to enhance food security.

He noted that if Ghanaian farmers were adequately supported, they had the capacity to feed the nation and export the surplus for foreign exchange.

"We know about the huge food imports and their impact on our economy; we can significantly reduce food imports if we are adequately resourced,” he said.

The National Best Farmer said it was time farmers took the necessary measures to address some of the challenges they encountered, while the government did its bit to support them.

“I believe we can invest our prizes massively in improving our farming systems to increase our yields.

Although the government is doing its part, we cannot sit back and watch when the support is not readily available.

This will be a good time to increase our yields with what we have received,” he added.

The 44-year-old farmer from the Mion District in the Northern Region, who is a father of four, has cultivated 850 acres of maize, 19 acres of tomatoes, 43 acres of okro, 48 acres of sorghum, four acres of shea, 13 acres of mango, a 1,400-acre cashew plantation, among others.

The Third Best National Farmer, Rev. Samuel Sida, corroborated Alhaji Mohammed’s assertion, adding: "Insufficient rain sometimes affects our yields and we wish the government would provide us with alternative sources of irrigation, such as dams, that will make up for the insufficient rain."

He also called on the government to institute price mechanisms for cash crops to help stabilise prices at the global level.

Other award winners on the day stressed the fact that some areas in the country experienced low rains, with the situation leading to instances such as browning of crops and lower yields.

They observed that the situation needed urgent attention from the government and other development agencies.

The need to patronise local produce also ran through the views of the award winners, who stressed that the local market was gradually fading away due to the influx of foreign products on the Ghanaian market.

"Sometimes we consume more of these foreign products and leave ours, which are sometimes even healthier and fresher.

We appeal to all Ghanaians to help us increase our market,” an award winner from the Upper West Region, Mr Ishaq Afiz, said.

He appealed for more stringent measures to deal with illegalities in the fisheries sector which were fast depleting fishery resources.

He said while the fishery sector could be optimised for the benefit of fishermen and fishing communities, the illegalities in the sector remained a bane to its development.

Residents of the Central Regional capital, Cape Coast, where the Farmers Day durbar was held, expressed mixed reactions over the celebration.

While some commended stakeholders for putting up a splendid programme, others insisted that it was out of order to have had the celebration in a region that "has received a little over zero recognition in the agricultural sector".