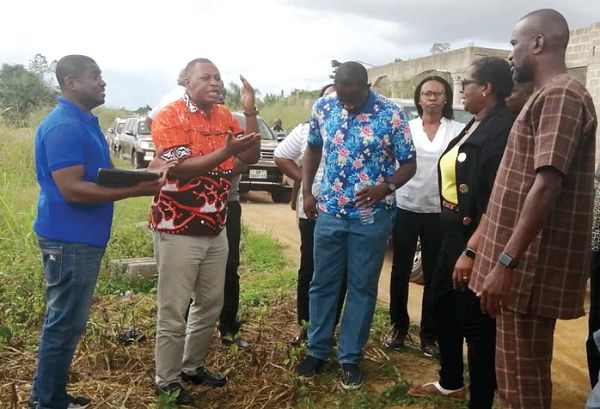 The Executive Secretary of the Public Utilities and Regulatory Commission (PURC), Mrs Mami Dufie Ofori, has cautioned that very soon Ghana may have to import water to supply its people if the rate at which people are encroaching and destroying the nation’s water bodies is not checked.

Mrs Ofori, who was astonished at the level of encroachment on the catchment areas of the Barekese and the Owabi dams in the Ashanti Region, said it was high time citizens resisted private developers who were posing a threat to all.

According to her, the problem was not peculiar to the Ashanti Region but cuts across the whole country and said it was time the public stopped the clandestine activities of people who destroyed the environment.

Mrs Ofori, who led commissioners of the PURC on a study tour of the Ashanti Region, blamed traditional authorities in the affected areas for the wanton disregard for the law to stay off the buffer zone of the dams.

“This is a national issue and we have to take it seriously, else we will wake up one day to find that no water is running through our taps,” she warned.

She said all the illegal activities were adding up to the cost of production of water, which was eventually passed on to the consumer.

She said for consumers to enjoy a reduction in water tariffs, there was the need to stop acts that contributed to the high operational cost of the Ghana Water Company Limited (GWCL).

The PURC was on a study tour to the region to acquaint itself with the activities of the GWCL and also assess its challenges in order to appreciate its demands for tariff increases.

Briefing the team, the acting Production Manager for Ashanti of the GWCL, Mr Charles Tulasi, explained that the company had been battling with the surrounding communities over the illegal activities which were affecting the dams.

He cited acts such as farming close to the banks of the rivers, sand-winning and the building of houses in the catchment areas of the dams.

He said the situation was worse at Owabi, where the people had virtually taken over all the land within the buffer zone and built on it.

He indicated that the situation was so serious that the dam had been heavily silted, reducing its depth from 21 feet to the current level of six feet.

Consequently, he said, there would be the need to dredge the dam in order to increase its depth for it to have more water for production.

Even though the GWCL currently produced enough water to supply consumers in the metropolis, Mr Tulasi said, the situation might change during the dry season.