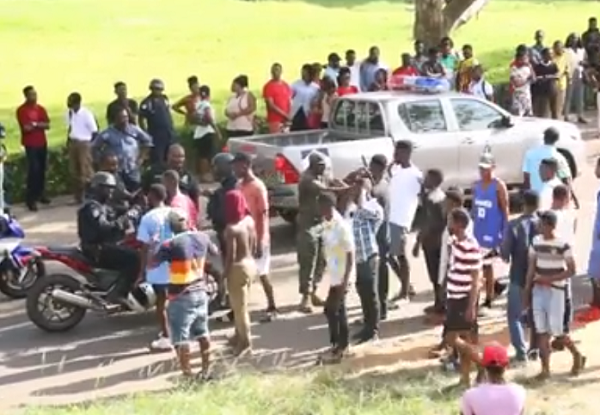 What was intended to be a peaceful inter-hall debate between the the Vandals of the Commonwealth Hall of University of Ghana's (UG)and students of the Katanga Hall of the Kwame Nkrumah University of Science and Technology degenerated into chaos which left one person injured and 10 others arrested by the Police.

According to a report by campus based radio station, Radio Universe, the brawl occurred moments before the inter-hall debate started.

One injured, 10 arrested in students clash on Legon campus

In the said video, a student seated on a bed and wearing a Vandals Lacoste is threatened to apologise for the actions of his group and seconds later his head is shaved with scissors in what appeared to be a "ransom video".

The viral video reportedly infuriated the Vandals who rushed to Mensah Sarbah Hall to rescue their colleague.

However, they were met with fierce resistance by the Vikings who are affiliated to Katanga of KNUST.

But for the timely intervention of the Police and campus security, the clash could have turned bloody.

Only one person was injured and is receiving treatment at the Legon Hospital while 10 others were arrested for their part in the scrap.

Watch the entire report below;