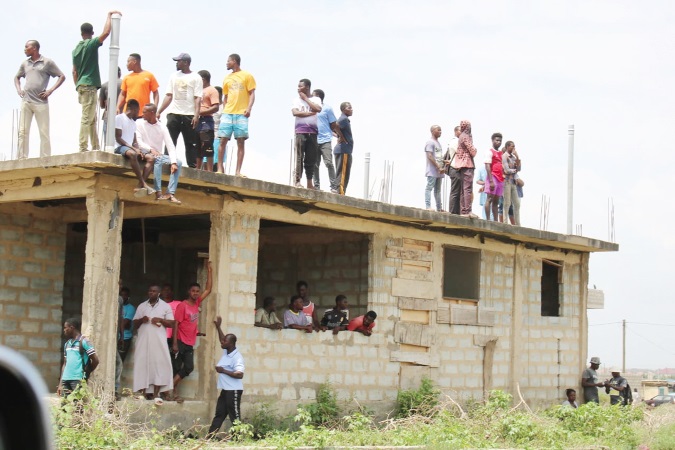 Some observers at the scene of the demolition exercise. Picture: Della Russel Ocloo
30.5k Shares

A number of walls built to secure plots of land along water courses at the Ramsar site at Klagon in the Tema West municipality have been pulled down in an exercise carried out by the Greater Accra Regional Coordinating Council (GARCC).

The exercise, undertaken in partnership with the Tema West Municipal Assembly and the Tema Metropolitan Assembly (TMA), saw some structures that were under development up to the lintel level also being demolished as part of an exercise officials claimed was aimed at protecting the remaining land space within the Ramsar site.

Contrary to earlier reports that all buildings identified to be on the encroached land were going to be demolished, no completed property was touched.

The Greater Accra Regional Minister, Henry Quartey, who led the exercise, as the head of the Regional Security Council (REGSEC), explained that the exercise was being undertaken in phases.

“We are working in phases and today's focus is on fence walls on plots of land which are yet to be developed, and this we want to do to protect water bodies," he said.

He explained that the demolition was required because it would allow water from the wetland to flow into the Sakumono Lagoon to avert flooding when it rained.

Ramsar sites are internationally recognised lands that collect and store water from nearby sources and so encroaching on them by building houses on such reserved lands causes flooding in the catchment area.

The Forestry Commission estimates the Sakumo Ramsar site to be a 4,200-acre plot of purchased by the government. However, there has been extensive encroachment by individuals and real estate developers who have erected homes on various parts of the site that makes up the site’s buffer and transition area.

Hundreds of acres of the once vibrant wetland have disappeared, to be replaced by endless rows of completed and uncompleted structures.

When the Daily Graphic arrived at the scene of the exercise at 7 a.m. yesterday, it observed that heavy duty equipment, mainly excavators and other machinery, had already been deployed at the area, along with a heavy police and military presence

The heavy security presence curtailed the usual drama associated with such demolition exercises, as policemen and military men were seen walking off property owners who had come to the site to witness the exercise.

There was a near two-hour suspension of the exercise when some people alleged that there had been telephone calls from some higher authorities who had asked for the exercise to be suspended owing to the status of some of the people who owned property in the affected area.

However, Mr Quartey debunked the claims, saying: "I don't know of any order from above.”

He stressed that once the walls were brought down, there would be another critical assessment, during which the Forestry Commission would identify buildings that were still on water courses and mark them for the next phase of the demolition.

While some of the affected people shed tears as they watched their structures being razed to the ground, others were in groups observing and discussing the demolition.

The Tema West Constituency Chairman of the New Patriotic Party (NPP), Kwasi Opoku Bosompem, was at the site, following complaints said he had received from some of the constituents about their structures being pulled down.

In an interaction with the media, Mr Quartey said the main objective of the exercise was to save the Ramsar site and the nation as a whole, given the impact of human activity through encroachment.

He intimated that already the Ashaiman under-bridge linking Ashaiman to Lashibi and Sakumono was experiencing the effects of flooding each time there were rains.

"If we don't deal with this issue now, in the next two or three years we will be dealing with much bigger disasters than we witnessed at Weija and other areas.

"The area, which was acquired by Dr Kwame Nkrumah, with the head lease under the Tema Development Corporation (TDC)and some parts of the acquisition being ceded for a Ramsar, has seen more than half of its acreage gone.

“We are undertaking the exercise, which will be in three phases, to protect what is left and also avert future disasters like we saw recently at Weija where homes were submerged in water," he stressed.

He debunked any suggestions that the exercise was politically linked, aimed at victimising people.

"The exercise is not in any shape or form to victimise people; rather, it is targeted at removing walls that have been erected in the core areas by people wishing to develop the apportionments into homes," he said.

Mr Quartey hinted that the Minister of Lands and Natural Resources and his team were putting in place measures to ensure that those who had already encroached on the land would go through proper processes to ensure that their properties were regularised.

"The minister will speak to that once they are able to outline the modalities for any such processes," he said.

Since 2018, the Forestry Commission has tried to pull down illegal structures at the Ramsar site to protect it, but it has not succeeded in its bid due to interference and court injunctions.

In the past, the National Disaster Management Organisation (NADMO) also tried to seek legal backing to demolish structures on water courses to avert flooding in urban areas but it was not successful.