VW to set up in Ghana - Germany to also supply technologies for power plant, vaccine factory 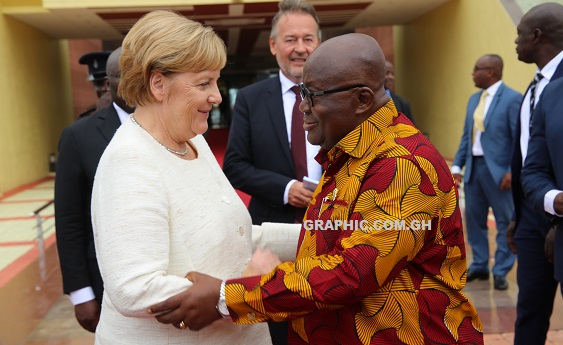 Bosch Packaging Technology GmBH and ASPIRx are expected to supply the technologies for the construction of the vaccine factory.

The second MoU for the establishment of an automotive assemblying plant in Ghana was signed between Volkswagen, (VW) and Ghana’s Ministry of Trade and Industry.

Before the signing of the MoUs at a ceremony in Accra, President Nana Addo Dankwa Akufo-Addo and the German Chancellor, Angela Merkel, had held bilateral talks at the Jubilee House.
The talks, held behind closed doors, are believed to have centred on, among other issues, economic cooperation between the two countries.

Before the bilateral talks, the German Chancellor, accompanied by a number of German officials and investors, had been met on her arrival at the Kotoka International Airport by the Vice-President, Alhaji Dr Mahamudu Bawumia.

The chancellor had already visited Senegal and was scheduled to visit Nigeria after her one-day visit to Ghana.

Her visit, the first by a German Chancellor to Ghana since 2004, was part of her three-nation West African tour.

It underlined the strong and deepening partnership between Ghana and Germany.

From 2009 to 2015 Ghana benefitted from 260 million euros in technical and financial support from the German government.

Recently, Germany signed a partnership agreement with Ghana for a 100-million euro support for the promotion of private investment and sustainable development.

At a joint press conference after the bilateral talks, Chancellor Merkel said the assembly plant and the support for the construction of a vaccine factory and the hybrid solar/hydro plant were part of efforts by Germany to support Ghana’s industrialisation drive and the Ghana Beyond Aid agenda of President Nana Akufo-Addo.

She said although the Ghana Beyond Aid agenda was not an easy journey, she was confident that with the current determination and capabilities of the people, Ghana would be able to attain that vision.

The German leader said she came along with a large team of investors who were interested in opening companies and forming joint partnerships in Ghana.

She said those companies that already had footprints in Ghana would also like to expand to provide job opportunities and improve the economy.

Reacting to the President’s call for investment to improve infrastructure in Ghana, especially in the rural areas, she gave an assurance that Germany was ready to assist Ghana to build its infrastructure and shape its energy sector to be efficient in adopting to new challenges.

Chancellor Merkel said Ghana played a crucial role in West African and African affairs and it was in the interest of Germany to support Ghana and ECOWAS to provide the youth with the needed skills and training and the required financial support.

That, she explained, would stem the increasing tide of desperate young people paying huge sums of money to human traffickers to embark on perilous journeys to Europe.

She said although 42 German universities provided educational exchange opportunities for some Ghanaian youth to acquire knowledge, she believed the number could be increased for more to benefit from legal migration to Germany to study.

She expressed her condolence to Ghana on the death of its illustrious son, Mr Kofi Annan, a former Secretary General of the United Nations (UN).

She said Mr Annan taught the world the way to engage in international politics for the benefit of everyone or in a win-win situation.

Chancellor Merkel said Mr Annan educated the world that survival of the fittest was not the best way to deal with others.

She commended the government for its avowed vision and commitment to the youth of the country with opportunities to be able to contribute their quota to the development of the country, saying it was in that direction that the German government wanted to support Ghana.

She also commended President Akufo-Addo for the success he had chalked up in the 18 months of his four-year term and assured him that Germany would stand shoulder to shoulder with him to achieve the Ghana Beyond Aid agenda.

Responding, President Akufo-Addo welcomed the decision by VW to establish a vehicle assembly plant in Ghana.

“There are so many areas that our bilateral relationship has offered us, but the key part of it, for me, is the emphasis on investment and trade cooperation,” he said.

He underscored the determination of Ghana to deal with issues confronting the country, such as youth unemployment and the desire of the youth to seek greener pastures elsewhere, by improving the management of the economy.

“The stronger the economy we have, the more opportunities it gives to young people and obviously the pressure that will be on them to embark on those hazardous undertakings will be dealt with,” he said.

Later, the German leader and her entourage were hosted to a lunch by President Akufo-Addo at the Banquet Hall.

Proposing the toast, the President said Ghana was concerned about finding sources of long-term financing for its industrial development and expressed the hope that the presence of the German Chancellor would pave the way for the opportunity for such a partnership.

He said given the opportunity, the 4,000 Ghanaians in Germany who had been declared illegal immigrants would stay and expressed the hope that they would be given an amnesty to regularise their stay in that country.

He said he was hopeful that the bonds of friendship and cooperation between the peoples and the governments of the two nations would be deepened, especially with Ghana’s position as Germany’s fourth largest trade partner in sub-Saharan Africa.

Recounting the support from Germany, the President said from 2009 to 2015 Ghana benefitted from 260 million euro in technical and financial support from the German government, while a partnership agreement for the promotion of private investment and sustainable development valued at 100 million was signed in Germany recently.

He expressed gratitude for the chancellor’s decision to streamline Germany’s development posture towards the Ghana Beyond Aid agenda and other moves to invest in the local economy.

He indicated that Ghana would not relent in its global commitment to halt climate change and would cooperate with Germany to fight against terrorism, poverty, irregular migration, insecurity, human rights violation and human trafficking.

He congratulated Germany on its election as a non-permanent member of the UN Security Council from 2019 to 2020, which he described as significant due to the council’s nature of seeking multilateral responses to global challenges.

President Akufo-Addo urged Germany to support Ghana’s bid to be elected as a non-permanent member of the UN Security Council from 2020 to 2021.

He reiterated Ghana’s call for the revival of the stalled UN reforms to the global agenda and called on Germany to help because the reforms would culminate in correcting the long-term injustices that the current composition of the UN Security Council represented for Africa.