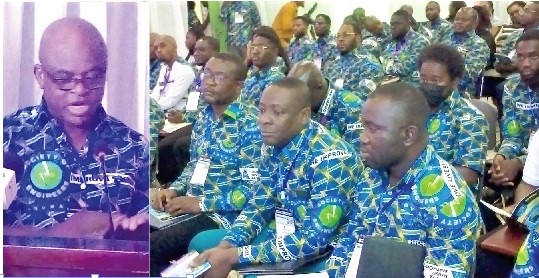 The Society of Volta River Authority Engineers (SOVRAE) has celebrated its 30th anniversary with a call on the members to adopt innovation and creativity to ensure the society survives in the emerging energy space.

The anniversary, which climaxed with a conference and other engineering activities, was dubbed: “Sustaining the power business in Ghana through creativity and innovation”.

SOVRAE was formed in September 1991 by some dedicated engineers of the authority who saw the need to have the society as a group to support engineering know-how and practices within the authority, and to serve as a technical advisory body to the VRA management.

The members of SOVRAE include confirmed or permanently employed engineers of VRA, engineers on national service, engineers on contract or on secondment, and honorary members.

The Chief Executive Officer (CEO) of VRA, Emmanuel Antwi-Darkwa, said there was the urgent need to harness innovation and creativity if the authority was to survive in the emerging energy space, adding that “you cannot do today’s job with yesterday’s method and be in business tomorrow”.

“There is competition locally, and the policy and regulatory environment is adapting rapidly to global energy trends. These are cumulatively re-defining our operations, and we need to adopt our organisational strategy and re-set our individual mindsets to remain the market leader in the power sector,” Mr Antwi-Darkwa said.

He said the event afforded the engineers a prime opportunity to advance discussions on their efforts at increasing and sustaining VRA’s market share in the energy sector as they assumed better ways of doing their work for better efficiencies and better outcomes.

Mr Antwi-Darkwa expressed the hope that the conference would contribute to the sustainability plan and provide comprehensive recommendations to help the management to verify and configure a secure baseline for best practices in the authority.

The President of SOVRAE, Kwaku Sarpong Mensah, said the successful operation and maintenance of the Akosombo Dam and other grid related infrastructure since 1965 could be largely credited to the level of professionalism and hard work exhibited by VRA engineers.

He said SOVRAE would engage engineers in other power utilities in Ghana to see how they could collaborate and channel their collective effort to address the challenges in the power sector through creativity and innovation.

A former CEO of the Ghana Grid Company (GRIDco), William Amuna, stressed the need for employment of new and advanced technology, integration of sub-regional power systems, gender and other related issues and energy renewal and energy transition as ways of addressing the challenges.

An engineer and management professional, Chief Musa Badimsugru Adam, stressed the need for SOVRAE to encourage more females into the society as some of the female engineers were performing well to expectation.