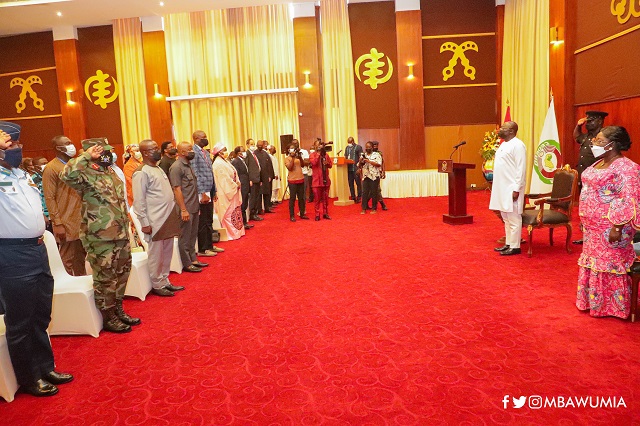 The Vice President, Dr Mahamudu Bawumia, has launched Ghana’s National Centre for Coordination of Early Warning and Response Mechanism and commissioned offices of the centre in Accra.

The establishment of the centre follows the endorsement by the ECOWAS Heads of States and Governments at its 45th Ordinary Session held in Accra. ECOWAS member states have since then begun establishing National Early Warning and Response Centres.

The Centre’s activities will be geared towards the detection, monitoring and analysis of conflict indicators and production of reports.

Performing the launch in Accra on Friday, 12th November, 2021, Vice President Bawumia said the work of the centre focuses on five thematic areas namely; Crime and Criminality; Governance and Human Rights; Health and Pandemics; Social, Economic and Environment; and Security, Terrorism and Maritimes.

To guarantee the existence of the centre across political regimes, the centre is established by an Act of Parliament referred to as the National Centre for Coordination of Early Warning and Response Mechanism 2021, Act 1070, passed by Parliament on 6th August, 2021, and subsequently signed into law by the President. The Act establishes a legal framework for the operation and administration of the centre.

Underscoring the need for such a centre, Dr Bawumia said the threat of terrorism and other related activities, as well as natural disasters had made it imperative to have early warning systems in place to allow Governments and other international prepare for any eventualities.

“Not too long ago threats of terrorism would have been considered remote. All too quickly, the sub-region is being threatened by terrorism and violent extremism. What started in parts of West Africa and the Sahel areas over two decades ago as insurgency, has developed into terrorism and the situation has allowed for the growth of extremism and other related criminal activities.

“The Centre’s role is to warn government of the threats to human security, propose appropriate actions, and to coordinate and ensure monitoring of the implementation of response to the warning at both the national and regional level.

“We are confident that through the needed directions and other support, the Ghana centre would be well positioned as a national strategic centre of excellence that shall inform decision-making to respond to crisis in Ghana and West Africa.”