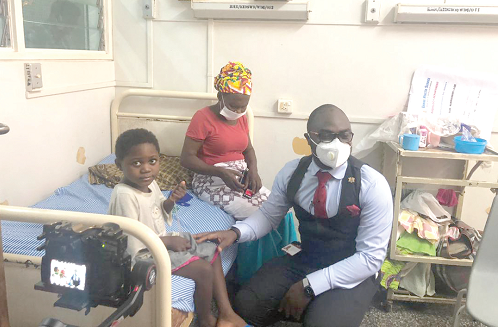 Margaret Dansoaa (left) a beneficiary with her grandmother (middle) and Rev. Amaris Perbi during the visit at the Eastern Regional Hospital
30.5k Shares

In spite of the existence of the National Health Insurance Scheme (NHIS), many sick people are unable to settle their medical bills.

This phenomenon, in many instances, has resulted in the creating of avoidable congestion in mostly, public health facilities.

It was against this background that the Vodafone Ghana Foundation identified and settled the bills of more than 100 financially challenged patients who were detained at some hospitals across the southern belt of the country.

The gesture forms part of the annual ‘Homecoming’ Initiative which sets out with a target to discharge over 300 insolvent patients across the country.

When the team of officials from Vodafone Foundation visited some of the beneficiaries at the Koforidua Eastern Regional Hospital in Koforidua last Thursday to cover the medical bills of 30 patients, there was joy in the wards visited as the beneficiaries showered praises on them for such an initiative.

The Head of the Vodafone Ghana Foundation, Rev. Amaris Nana Adjei Perbi, said the foundation had successfully been able to discharge over 200 patients from the northern and middle belts of the country, covering 11 regions and 15 medical institutions.

He added that over 100 patients were expected to be discharged in the southern belt initiative.

“As it was done in the previous belts covered by the Homecoming Initiative, and to ensure the sustainability of the project, all our beneficiaries will also receive new or renewed National Health Insurance Scheme cards as well as face masks, face shields and hand sanitiser to protect against the pandemic.

“While selected patients will also be given seed capital to assist with their endeavours once they are discharged from the hospital,” he said.

Beneficiaries of this year’s gesture included mothers who had been delivered of their babies at various labour wards, infants at the children’s units and the elderly who have been unable to settle their bills.

“With this support, I cannot wait to visit my family to share the good news with them. Vodafone Ghana Foundation would never be forgotten by my family,” said Mr Samuel Kumah, a 52-year-old man who had been detained for six months after undergoing a surgery on his swollen testicles.

Miss Susana Kumi, a trader explaining how her four-year-old daughter became unconscious for two weeks after an attack, said the child who was discharged after recovery at the hospital had to stay for an additional two weeks due to their inability to settle the medical bills.

“We are so thankful to Vodafone Ghana Foundation for the support,” she added

The foundation also settled the bill of Theresa, the youngest among the three sisters who were involved in a serious accident that left them with severe injuries.

Theresa went through a successful surgery at the St Joseph’s Hospital, Koforidua, to treat her fractured legs.

A clinical director at the Koforidua Regional Hospital, Dr Foster Amponsah-Manu, expressed appreciation to Vodafone Foundation for the support.

“I will say thank you very much and we will plead if you can even come and annex a ward where you will help us treat patients and give better services as we intend to.

“We think this is an important exercise and we will plead with other organisations and Vodafone Ghana to continue with this laudable initiative,” he noted.