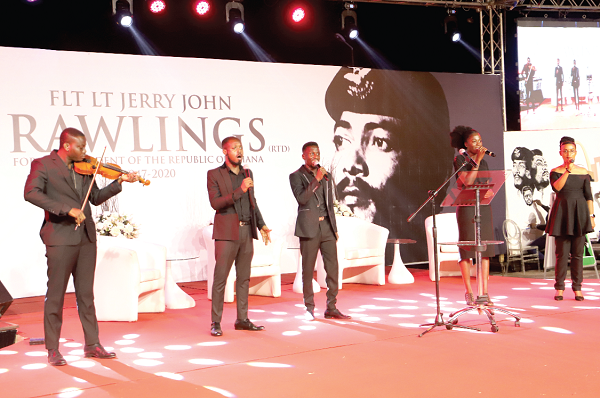 It was a solemn atmosphere at the Air Force Officers Mess in Accra last Sunday evening where hundreds of sympathisers gathered to hold a vigil in honour of the late former President, Jerry John Rawlings.

The two-hour event formed part of the final funeral rites of the first President of the Fourth Republic, who died at the Korle Bu Teaching Hospital in Accra on Thursday, November 12, last year.

A large number of sympathisers, majority of whom were clad in black, eulogised the former President for his good works as a military officer and Head of State and his contributions to Ghana’s development, particularly since the inception of the Fourth Republic.

The vigil was marked with a documentary titled: “Testimonies to a patriot”, which detailed the life and works of former President Rawlings, highlighting his diverse contributions to Ghana’s growth and stability.

In attendance were members of the bereaved family, the clergy, serving and retired senior officers of the Ghana Armed Forces, members of the Diplomatic Corps, government officials, representatives of the various security agencies, leaders of political parties, among others.

Sharing fond memories of her father in a brief tribute, the eldest of former President Rawlings’s children, Dr Zenator Agyeman-Rawlings, described her father as a perfectionist and someone who paid critical attention to detail, adding: “He was a perfectionist and had a way of bringing your attention to certain details. It is one of the things I learnt from him that has shaped my life till today.”

She said her father, being someone who was not attracted to material wealth, made a conscious effort to ensure she and her siblings lived modest lives.

Dr Agyeman-Rawlings also said her father sympathised with the plight and experiences of ordinary people.

“He was purpose-driven and every encounter with him needed to have some kind of meaning and outcome of a sort. Thus he was a combination of love and everything,” she said.

Dr Agyeman-Rawlings is the Member of Parliament (MP) for Korle Klottey in Accra.

A confidant of the late former President, Group Captain Richard Fordjour (retd), described him as someone who was very soft at heart but “protected that character with a stern outlook”.

He claimed that the former President “died betrayed”, citing the release of the book titled: “Working with Rawlings” authored by Prof. Kwamena Ahwoi, a former appointee of the late President, and the demise of his (Rawlings’s) mother.

In an interview after the event, the Chairman of the National Democratic Congress (NDC), Mr Samuel Ofosu Ampofo, urged members of the party to fully participate in all activities marking the final funeral rites of the late former President.

“We have lined up some activities to remember and celebrate our former President, who is also the founder of our party. We urge all party members to put their hearts and souls and spirits behind what is happening,” he said.