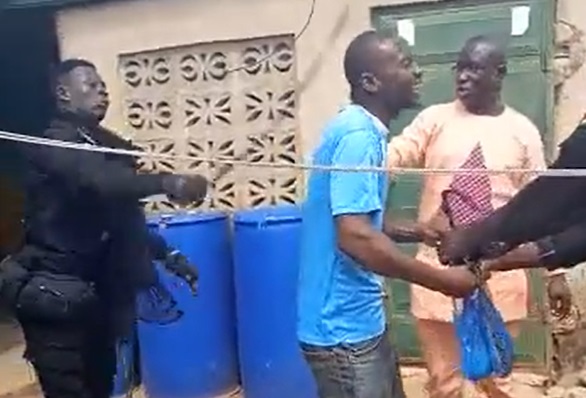 A screenshot of the alleged assault

The Ghana Police Service has interdicted four police officers for unprofessional conduct after they allegedly assaulted some persons in Tamale in the Northern Region on September 21, 2021.

The four officers working with the Northern Regional Police Command were assigned to assist NEDCO/VRA officials to arrest some persons allegedly involved in illegal power connections.

The Police administration has interdict four police officers in this video for alleged assault on this man. The unfortunate assault happened in Tamale. #IGPmo pic.twitter.com/WCW1PrjOvU

A press statement issued by the Police said the officers will face a Service Inquiry, subject to the regulations of the Ghana Police Service.

"Processes have commenced to identify the victims for the necessary medical assessments and assistance. We apologise unconditionally to the affected persons and the general public," the release said.

A viral video of the incident which preceded the Police statement showed a police officer whipping a man on his head and body during an interrogation.