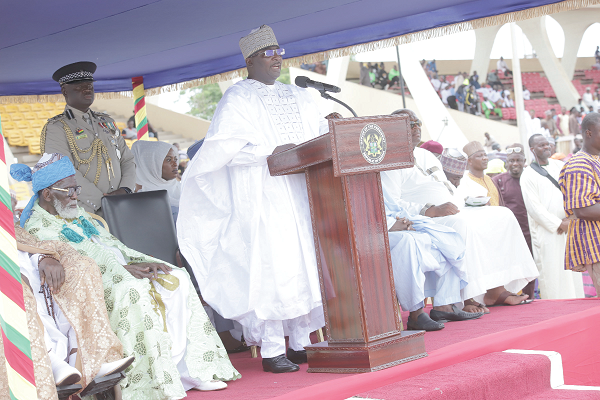 The Vice-President, Dr Mahamudu Bawumia, has called on various religious groups in the country to continue to strengthen the ties among them, regardless of their different religious identities.

He said faith-based groups elsewhere were at one another’s throats and destroying the peace of their communities, while Ghana was blessed with tolerant and progressive religious leadership.

Dr Bawumia, who was addressing his fellow Muslims at this year’s Eid-ul-Fitr prayers to climax the Holy Month of Ramadan at the Black Star Square in Accra yesterday, said by strengthening the ties among them, the religious groups could continue to positively influence communities, as well as the nation.

Over the last two years, the Eid-ul-Fitr prayers had been held either virtually or at the forecourt of the Ghana Broadcasting Corporation (GBC). The relaxation of the COVID-19 restrictions a couple of months ago paved the way for the gathering this year.

Already, the Vice-President said, the country had been acclaimed globally as peaceful and “we have attained the enviable position on the Global Peace Index as the most peaceful country in West Africa and the second most peaceful in Africa.”

That, he explained, was because of the tolerance, cooperation and mutual respect between Muslims and Christians across the country.

He, therefore, urged all Ghanaians to continue to be one another’s keeper, love one another and be tolerant of one another, regardless of their religious and political affiliations.

Beyond the Eid-ul-Fitr, he said, “let us uphold the great Islamic values of selflessness, generosity and compassion towards humanity during the month of Ramadan.”

Touching on the COVID-19 pandemic, which had restricted the Muslim fraternity from celebrating the Eid-ul-Fitr in large numbers in the last two years, he said Ghanaians had to adjust their “normal ways of life and embrace new restrictions imposed by the government as we battled to overcome the devastating effects of the pandemic”.

As part of the restrictions, Dr Bawumia said, the Hajj pilgrimage was also cancelled.

He, therefore, urged Muslims to be thankful for the easing of the pandemic restrictions, which had resulted in bringing some normalcy to life.

The Vice-President said the effects of the pandemic, which had ravaged global economies, did not spare Ghana, with the government losing huge revenues and spending massively to ameliorate the plight of Ghanaians.

“In effect, the pandemic severely drew the economy back from the massive progress the government had achieved between 2017 and 2019. That setback, without doubt, made life more difficult for the citizenry and the government, as prices of goods soared across the world due to the abnormal increase in the cost of international trade,” he indicated.

As if that was not enough, Dr Bawumia said, “the Russia-Ukraine war hit us at the beginning of this year when our economy showed signs of bouncing back from the shackles of COVID-19.”

However, he said, the government had not reneged on its commitments to the people in the areas of education, health care and infrastructure development.

He mentioned ongoing development of infrastructure across the country, such as roads, bridges, schools, healthcare facilities, drainage, water systems, astro turf football pitches, educational scholarships, and support for entrepreneurial development as some commitments kept by the government, as well as the inclusive development of Zongo communities through the Zongo Development Fund.

“Recently, the Zongo Development Fund has completed about 200 projects,” he pointed out, saying the construction of modern senior high schools for the Zongos would start this year.

Generally, he said, the government had “shown that we understand and feel the plight of Ghanaians, and that we have not turned our backs on the people in the midst of crisis.”

While acknowledging the supporting interventions and initiatives by faith-based organisations, Vice-President Bawumia said he was impressed by how both Christian and Muslim groups continued to complement the development efforts of the government, particularly at a time when the government was under so much pressure.

“Our faith-based groups have demonstrated that, with unity of purpose, they can contribute significantly towards the sustainable development of our country,” he said.

He urged those groups to venture into other sectors such as agriculture and small-scale production to support the youth.

For his part, the National Chief Imam, Sheikh Osman Nuhu Sharubutu, urged Muslims and Ghanaians, in general, to uphold the values of discipline, peace, tolerance, love, unity, forgiveness, compassion and reconciliation imbedded in the sanctified period of the Ramadan fasting.

He said as people living in a multi-religious democratic society, it was incumbent on all to adhere to religious and civic responsibilities to enhance a healthy relationship with members of different faiths, so that national harmony and development would be consolidated.

Sheikh Sharubutu said that was in line with the tradition of Prophet Muhammed — that religion belonged to Allah, the nation belonged to all and patriotism was part of faith.

“Let us all have it at the back of our minds that we were all created from Adam and Eve and placed into different categories for us to know and tolerate one another,” the Chief Imam added.