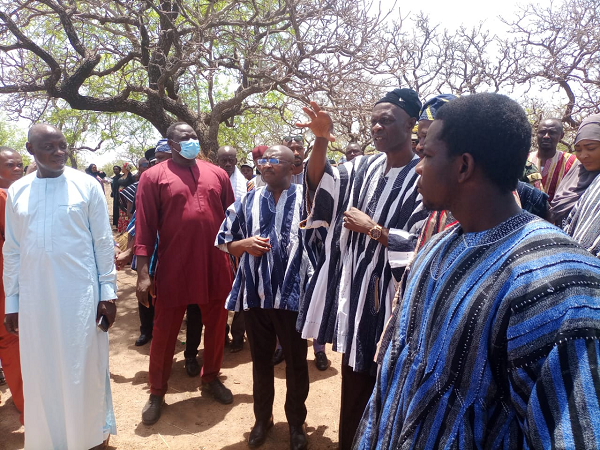 The Vice-President Dr Mahamudu Bawumia has presented  GH¢60,000 to victims of last Thursday's attack that resulted in the death of eight persons and injury of others at Zakoli community in the Yendi Municipality.

The donation is to support the  families of the deceased persons and those who sustained various degrees of gunshot wounds.

He  also toured the communities that were attacked to assess the extent of damage and to empathise with the victims.

Presenting the cash to the Chief of the Community, Naa Abukari Andani for onward allocation to the victims, Dr Bawumia said the donation was an immediate intervention to mitigate the plight of the victims.

He indicated that  the government would in the coming days  dispatch relief items  to support the people.

Naa Andani thanked the Vice President for the gesture and called on the police to thoroughly investigate the matter and arrest the perpetrators.

He asserted  that failure of this may result in reprisal attacks which could be devastating than what occurred.

At least eight people were confirmed dead Wednesday, April 13, 2022, evening and five others sustained injuries after some unknown gunmen raided Zakoli and Konkon, nomadic settlements, in the Yendi area of the Northern Region.

The incident  occurred Wednesday afternoon and resulted in the burning of many thatch-roofed houses and other properties.

They reportedly targeted only men, including male children.

But Graphic Online  gathered that there was a robbery attack on the Yendi-Tatale road on Tuesday night which led to the death of a young man.

Suspecting that the robbers were nomadic, the unknown gunmen attacked them in retaliation of the robbery attack.

Calm has since returned to the areas as the police has beefed up security.
END