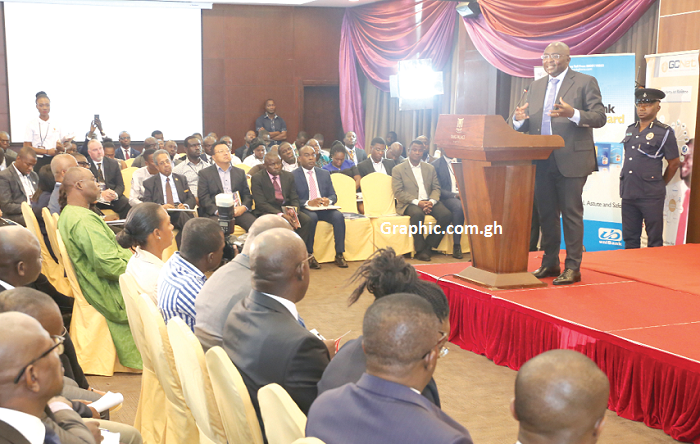 Vice-president Alhaji Dr Mahamudu Bawumia has observed that an enhancement of the mobile money transfer system to ensure transfers across networks will help in stepping up efforts at bringing banking services to the majority of Ghanaians who remain unbanked.

“This is a very important issue, one that all stakeholders should turn their attention to because Ghana is a country that is blessed with a major banking architecture that cannot be found in any other country,” he stressed.

He, therefore, encouraged banks and mobile networks to collaborate to increase the range of services available to customers, saying with many Ghanaians holding mobile phones, it offered limitless opportunities for other sectors to introduce a vast majority of Ghanaians to financial products.

The Vice President said this when he delivered an address at the fifth edition of the Economic Outlook and Business Summit in Accra yesterday.

It was on the theme: “Unlocking Ghana’s Potential with Mobile Money and Payment System.”

He said in spite of the fact that banking started in Ghana over a century ago, only 40 per cent of the Ghanaian population had bank accounts, which meant that the majority of the population was unbanked.

That unbanked population, he said, therefore, used cash for transaction, excluding them from the formal financial system.

He recounted that in July, 2015, the Bank of Ghana introduced a new e-money issuer guideline to guide the mobile sector and that a key guideline was that banks should pay interest on the float they kept on behalf of the e-money issuers.

“While this is heartening, we would continue to urge the Central Bank to look at the regulations to try to better understand the space so that the sector can grow and at the same time keep our financial system stable,” he added.

Vice President Bawumia said the role of financial inclusion in development was one that had been long recognised throughout economic history.

The reason, he said, was that an economy with the majority of its population being unbanked and, therefore, excluded from the financial system, meant that savings in that financial system would be much lower.

He said the whole issue of interest rates and how to bring them down sustainably had a direct relationship with financial inclusion.

“Many in our markets have ignored this for a long time but it is not difficult to see that if you have more savings in the financial system, then interest rates, other things being equal, would come down,” he proffered.

He added that in an economy where 70 per cent of the population was excluded from the financial system, one should expect higher interest rates, “since financial inclusion and bringing down interest rates are actually quiet linked.”

The Vice President said the government was pro-business with a resolve to build the most business-friendly economy in Africa.

“We are keen on developing the financial sector to deepen financial inclusion and bring more Ghanaians out of extreme poverty,” he said.

Fundamentally, he explained, “what we are trying to do is to formalise the economy. There are three pillars to it, which are financial inclusion, national identification and property addressing system. If you have all these three pillars, then you have the necessary backbone for a formal economy.”

He said the government was of the belief that the economy could be formalised using a national database that would be generated by the national identification system as the primary identifier.

Under the programme, he said, every property would have a unique address and with interoperability among the various networks, the potential was huge, but not much had been accomplished.

“I have so much confidence in Ghana and the potentials we have are great and we need to take advantage of them and be that Black Star in Africa,” he affirmed.