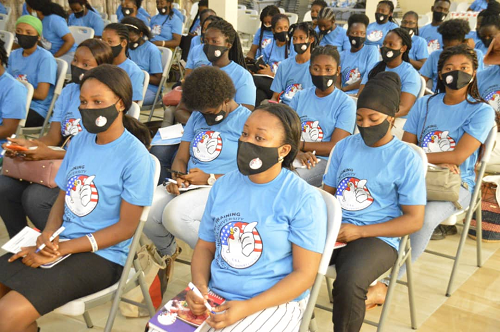 Student chefs in Technical Universities in Ghana had the opportunity to exhibit their cooking skills in an exciting cooking competition organised by the USA Poultry and Egg Export Council (USAPEEC).

All eight Technical Universities with their selected best student chefs participated in the competition which aimed at contributing to the holistic development of young Ghanaian chefs as they learn, compete and share creative ideas.

Judges for this year’s competition were drawn from the hospitality industry as well as academia with good understanding of the industry, and have carved a niche for themselves in their various fields of endeavor.

A press release issued and signed by Mr. Daniel Ansong said the event was geared towards enabling student chefs to exhibit their creative skills in chicken, duck, turkey and processed egg recipes, thereby exposing them to international best practices and preparing them adequately for an ever-growing local and international hospitality industry.

The release said USAPEEC has been and continue to be at the forefront of helping build professionals within the hospitality sector through their innovative training and cooking competition among the Technical Universities in Ghana.

According to the release, the first edition of the competition was held in 2015 at the Kumasi Technical University where Miss Sophia Ekua Hammond of the Kumasi Technical University emerged as the overall winner. The winning prize allowed for Sophia to travel to the United States of America for a week of training at the Institute of Culinary Education (ICE), New York.

The second edition was held at the Flair Catering Institute in 2016 where Miss Rejoice Akukumah Mayoe of the Koforidua Technical University emerged as the winner.

The third edition was also held at the Flair Catering Institute in 2017 where Miss Josephine Ngenba-Engaa of the Tamale Technical University won. Both Rejoice and Josephine also travelled to New York, for training at ICE, a prestigious culinary institution. Their experiences and exposure were reported to be a huge success and also a life changing experience.

The fourth edition held in 2019 was also won by Evelyn Benyiwa Yankson from the Ho Technical University. Evelyn’s prize was a six-month fully paid industrial attachment with Ghana’s premium 5-star hotel, Labadi Beach Hotel, who were sponsors of the prize.

“In a bid to make the experience accessible and beneficial to many more students, USAPEEC came up with a training program to precede the cooking competition. This was a great innovation that all stakeholders embraced”, the release said.

With the innovation, it added that the 2019 edition saw the expansion of the base, to include a pre-training for 100 students drawn from the HCIM Department of the Technical Universities.

This year, the training was held virtually due to the COVID-19 and its associated restrictions but USAPEEC simultaneously connected students from all the eight technical Universities to Chef David Bonom’s kitchen in New York, USA, and a total of over 1,400 students benefited from the two-day virtual training.

USAPEEC expressed gratitude to Heads of Department (HODs), of the Hospitality Departments of the participating Technical Universities for their contribution as stakeholders, hard work and dedication to students’ growth and development which made the two events successful.

It assured the Ghanaian public of its commitment to promote the consumption of wholesome chicken as an essential nutritional component of human food with essential minerals and micro-nutrients for growth and wellbeing.