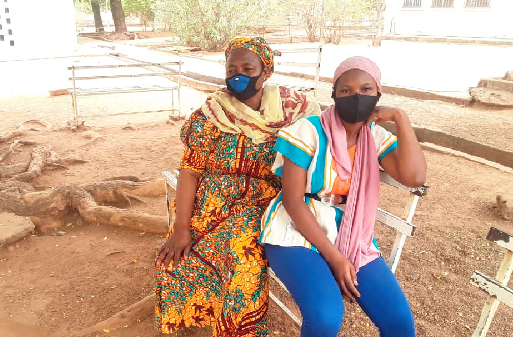 Hajia Alhassan Habiba (behind) and her daughter, Miss Mamata Alhassan sitting on one of the visitors' benches at the Bolgatanga Girls Senior High School
30.5k Shares

As senior high schools (SHSs) in the Upper East Region prepare to admit freshers by the end of this week, some parents are making frantic efforts to get placement in the schools of their children’s choice.

Some of the students who were automatically placed as day students, say they might have difficulties travelling long distances from their respective homes to the schools and vice- versa.

Indeed, time is running out for some of the parents because they have to first secure schools for their children before they can talk of procuring the prospectus to buy the items their children might need for school.

During a visit to some of the schools to assess the situation on the ground, the Daily Graphic had an interaction with a single mother and trader from Zebilla in the Bawku West District of the Upper East Region, Hajia Alhassan Habiba at the Bolgatanga Girls Senior High School (BOGISS).

She had gone to BOGISS to secure admission for her daughter as a boarding student.

Appearing unhappy, she stated that she was disappointed because she was having a hectic time getting her daughter, Miss Mamata Alhassan, admission to enjoy boarding school facilities instead of being a day student.

She said her daughter was however, automatically placed through the CSSPS as a day student at the Zebilla Senior High Technical School.

Additionally, transportation to and from school would be a challenge.

She further said she was apprehensive of the fact that her daughter might not be able to concentrate very well in school if she was made a day student and that was why she was determined to let her be in the boarding house.

Hajia Habiba also pointed out that if her daughter had been placed in either her first or second choice school all located in Kumasi in the Ashanti Region, her daughter's elderly siblings who were working in Kumasi would keep her in check if she decided to go wayward, even if she was made a day student.

“She is my last born and I cannot afford to rent a private residence or apartment for her alone to stay outside the campus if I don't want her to be coming home frequently. In fact, I want her to be serious with her studies that is why I want her to get a boarding facility instead of staying with me," Hajia Habiba stated.

Miss Alhassan (the fresh student) said she wept bitterly when she was told that she had been placed at the Zebilla School as a day student.

She was unhappy that some of her colleagues who were given the opportunity to do self-placement all got the schools of their choice while she and others who were automatically placed did not get the schools they would have preferred.

Candidates who wrote this year’s Basic Education Certificate Examination (BECE) were made to select five schools of their choice with the last two being a technical/vocational school and a day school in one’s catchment area.

This reporter later gathered that Miss Alhassan's case was not the only one. For instance, some of her colleagues who were from Zebilla were also automatically placed in schools at Navrongo in the Kassena Nankana Municipality as day students whereas they did not have any relative to stay with at Navrongo.

At the time of filing this report, Hajia Habiba was on her way to Kumasi in the Ashanti Region in search of a school for her daughter because she was unsuccessful in securing admission for her daughter at BOGISS.

When contacted, the Upper East Regional Director of the Ghana Education Service (GES), Mr Edward Azure, indicated that the GES had put in place measures, including making available some contact numbers which parents such as Hajia Habiba could call for help regarding placement issues and other matters.

According to him, as part of efforts to ensure smooth academic work, the government had put in place some interventions. They include the provision of a number of personal protective equipment (PPE) to all schools while educational infrastructure has also been enhanced to accommodate students both in class and in dormitories. The provision of school uniforms, textbooks and learning materials have not been left out.

The director explained that some of the items in most cases might be ready before schools re-opened but often, they were inadequate to meet all the needs of the schools.

Authorities of the 33 schools in the region who pleaded anonymity outlined a number of challenges they were likely to face or were already facing as schools were preparing to receive fresh students.

The challenges include inadequate supply of classroom furniture, food stuff, PPE, late release of funds and logistics as well as the problem of managing day students as they commute from homes and long distances to the schools.

Other challenges are lack of teacher accommodation, late reporting to school by new students or freshers, slow pace in the completion of educational infrastructure projects including E-blocks, inadequate white boards and markers.