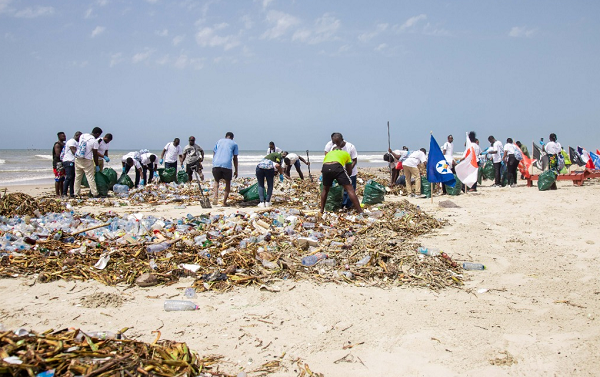 The United Kingdom-Ghana Chamber of Commerce (UKGCC) has marked this year’s World Earth Day by engaging in a massive clean-up exercise at the Labadi beach.

The exercise was to rid the beach of huge waste materials that had engulfed the area.

Earth Day is an annual event celebrated on April 22 to demonstrate support for environmental protection since 1970.

The day is marked every year to highlight environmental issues including; loss of biodiversity, increasing pollution among others.

The event witnessed some volunteers busily sweeping, picking plastic materials and evacuating heaps of refuse that had mar the beauty of the beach.

The Executive Director for UKGCC, Mrs Adjoba Kyiamah noted that in Ghana, beach pollution had emerged as a matter of serious concern in the pollution discourse.

She said most of the pollution found on the beaches were plastic which were generated by human activities along the coastlines and the far inland.

Although the clean up was a necessary tool in fight beach pollution, she said it was only a short term solution and, therefore, called for the adoption of long term actions to end the menace.

“Some of these actions should include reducing our use of single-use plastics, supporting legislation to curb non-recyclable plastic production and plastic waste, adopting proper recycle habits, avoiding products containing micro beads and simply spreading the word on ridding our habits of pollution,” Mrs Kyiamah said.

The UKGCC, she said, believed that the physical environment mattered to the success of businesses just as policy and advocacy and was proud to be associated with the clean-up exercise.

The Executive Director said the holistic approach towards creating networks and connecting businesses underpinned the partnership with Trashy Bags Africa as a partner in the concerted fight against climate change.

The Chief Executive of Trashy Bags Africa, Mr Philip Foster, said it was important for everyone to take responsibility of their own activities on the daily bases.

By doing that, he said, it would make a big difference and help save the world from climate change.

He said marine pollution was not only devastating marine life but gradually reducing the quality of life of the humans whose activities caused such catastrophe.

While admitting that curbing the menace of indiscriminate disposal of plastic waste would take time, he suggested that the government are adopting positive workable interventions to help reduce the situation.

“I am, therefore, pleased to be part of this exercise which will help to curb the rate of pollution on our beaches and turn the tide of the pollution narrative to one which ends in his averting a potential tragedy and safeguarding the future of generations yet unborn,” Mr Foster said.