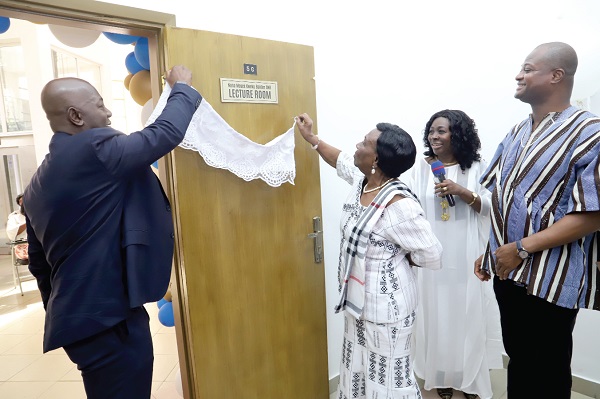 The University of Ghana School of Law as inaugurated a refurbished lecture hall in honour of the late renowned businessman and educationist, Nana Moses Kweku Baiden.

Held in Accra last Tuesday the inauguration, done in partnership with the Baiden Family, also saw the launch of the Kweku Baiden prize award scheme which has been set up to encourage the quality study of law in the country and award outstanding law students.

The Head of the Baiden Family delegation, Moses Baiden Jnr, said the refurbishment was done as part of a fund-raising activity to develop and upgrade the infrastructure and facilities of the University's School of Law.

He added that the lecture hall was refurbished and named after his father to encourage others to follow the good example he set.

Additionally, he said, Mr Baiden, who was also the founder of the Chapel Hill School and the Nest School Complex in Takoradi exhibited high ideals, high ambitions and was committed to the promotion of social, economic and political interests of the country for the betterment of the society which was worthy of emulation.

"He was deeply passionate about education and believed that education was fundamental to the transformation of societies and the advancement of nations," he added.

Reminiscing the days spent with her father, Lady Adelaide Heward-Mills said although Mr Baiden did not have any formal education in his lifetime, he valued education and its benefits.

"He used to say we were lucky to be educated because he did not have that chance due to limited resources but helped with whatever we needed and promised to help us to the highest summit and the peak," she said.

She expressed appreciation to the University of Ghana Faculty of Law for graciously accepting to be part of honouring their father who left a great legacy.

Another son, Kwesi Atta Panyin Baiden also described his father as a pocket lawyer and said although his father never had the opportunity to attend law school, he was known in his days as a lawyer by trade as he was seen representing himself in court, especially on small claims.

"Today by the grace of God, he has four children who are lawyers, three of whom are members of this esteemed faculty. This memorial is our way of saying thank you and also getting him to law school through the back door," he said.

The Dean of the University of Ghana School of Law, Prof. Raymond Atuguba, said the fund-raising activity to redevelop the infrastructure of the law school was initiated by renowned lawyer, Prof. Akua Kuenyehia in the year 2000.

He thanked the Baiden family on behalf of the Faculty for constructing the lecture hall in line with the faculty's vision.