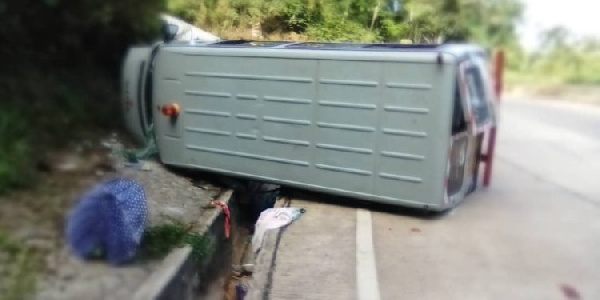 A lecturer and three female students of the University of Education, Winneba (UEW) who were on an educational trip to Mount Afadja have lost their lives in an accident at Apirede in the Okere District in the Eastern Region.

The accident, which led to several others sustaining life-threatening injuries, occurred last Friday.

According to reports, some of them were rushed to the Eastern Regional Hospital and the Winneba Specialist and Trauma Hospital for treatment.

The lecturer, Emmanuel Osei Yeboah was travelling with the students on an educational trip to Mount Afadja [Afadjato] in the Volta region.

The victims were all from the University’s Department of Early Grade and Childhood Development.

According to an eye-witness, the accident occurred after the bus carrying the lecturer and students veered off the road, and ran into a valley at Apirede.

He narrated that a headcount revealed that 28 passengers sustained various life-threatening injuries.

The students and management of UEW, have been thrown into a state of mourning with some students expressing their shock after the news broke.
Earlier on September 8, three persons were confirmed dead in an accident at Nkaeso, Techiman in the Bono East Region.

Per reports, the Matiz taxi was travelling from Sunyani, towards Techiman while the Hyundai mini truck was also heading towards Sunyani.

Preliminary investigation into the accident revealed that the two drivers were trying to swerve potholes, resulting in the head-on collision.