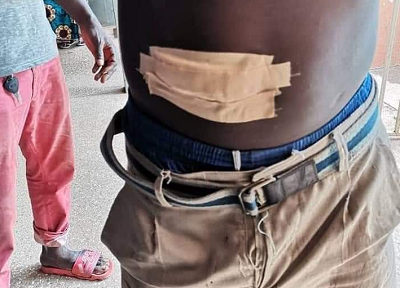 Two persons sustained gunshot wounds resulting in the death of one of them following a misunderstanding between two separate groups of people who are claiming ownership of a piece of land at Sabon Gare, a suburb of Bawku, in the Upper East Region.

The misunderstanding degenerated into violence when claimants to the land reportedly engaged in gun fire exchanges that resulted in the death of Mohammed Mahmood, 26 a ‘Mahama-Can-do rider’.

Mahmood allegedly sustained gunshots wounds in the head and later died at the Bawku Presbyterian hospital.

The other victim, a student, Zulka Salam,16 also reportedly sustained gunshot wounds in the abdomen but was treated and discharged at the same hospital.

He however pointed out that both the deceased and injured person were only victims of the land dispute between the two groups of people and that the incident is not in any way related to the Bawku conflict.

He further explained that, police in Bawku received complaints from two persons on the same day the incident happened that they were developing their plot of land at Sabon Gare when some other two individuals came to claim ownership of the same land.

While the police were taking statements from the two persons, another group also came to make similar complaints that some people have encroached on their piece of land.

The Police subsequently advised the two groups of people to avoid working on the piece of land in contention until investigations were concluded on the veracity of their respective claims.

ASP Fianko-Okyere observed that police later received another piece of information at about 2:30pm that there has been a shooting incident on the piece of land in contention.

Police moved in and investigations revealed that two people sustained gunshot wounds and were receiving treatment at the Bawku Presbyterian hospital.

However one of the victims was treated and discharged while the other was confirmed dead by the medical doctor on duty.

ASP Fianko-Okyere however assured the public of thorough investigations to arrest perpetrators of the incident and prosecute them.

He stated that calm has since been restored in the area and people are going about their normal duties.

Both Commanders met members of the Bawku Municipal Security Council(MUSEC)to ascertain the circumstances that led to the shooting incident and measures they have put in place to deal with the situation.

DCOP Dr Gariba commended the Bawku MUSEC for their proactiveness to contain the situation from escalating.

Both Commanders and MUSEC members later interacted with traditional authorities in the Bawku area and they pledged to support the security agencies to help maintain peace in the area.