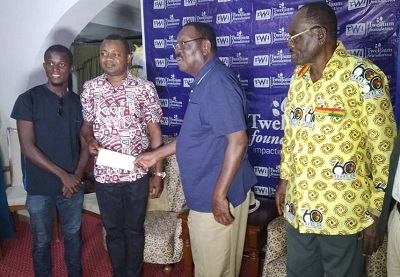 The Twellium Foundation has donated GH¢40,000 towards the completion of expansion works on the Alajo Central Mosque in Accra.

Mustapha Anass, the Head of projects and events at Twellium Industries, producers of Rush Energy Drink and Verna Mineral Water handed over the cheque to the chairman of the Pilgrimage Affairs Office of Ghana, Sheikh I.C. Quaye and the Municipal Chief Executive of the Ayawaso Central Municipal Assembly, Alhaji Mohammed Quaye at a brief ceremony on Monday in Accra.

According to Mr Anass, the donation by Twellium was in support of the Islamic faith and a commitment of the brand to all laudable initiatives in Ghana.

Sheikh I.C. Quaye said the Alajo Central Mosque currently has space for only over a 1,000 worshippers and as a result, many had to struggle for space to worship outside.

He stated that after the expansion was completed, the facility would have space for over 3,000 worshippers.

Expressing gratitude to Twellium for their generosity, Sheikh I.C. Quaye also urged other corporate bodies to support the expansion project.

He said: "This is a gesture that awards blessings to Twellium who are noted for their charity. They have been very charitable to not only Moslems but all Ghanaians".

"Alajo is doing extension works and they have reached very far but they still need about triple of this amount (GH¢40,000) to be able to complete. We are hopeful that by the end of Ramadan, we would see the completion of this extension so that those who pray outside would now go upstairs to pray".