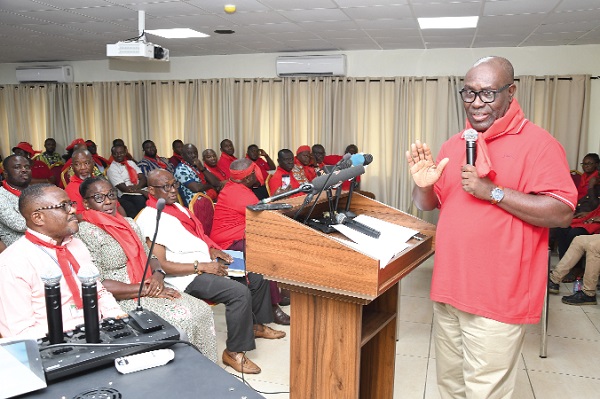 Organised labour has declared an indefinite strike from December 27 to drum home its demand for the government to exempt pension funds from the Debt Exchange Programme (DEP).

The industrial action followed a one-week ultimatum given by organised labour for the government to rescind its decision to include pension funds in the DEP, else workers “will advise themselves”,

Announcing the strike in Accra yesterday, the Secretary General of the Trades Union Congress (TUC), Dr Yaw Baah, said the government had failed to heed the demands of organised labour.

The demands, he said, were communicated to the Minister of Finance, Ken Ofori-Atta, on December 12, this year.

“The government has refused to grant us our request that all pension funds be exempted from the DEP. We have decided firmly that all workers of Ghana are going on strike on December 27.

“We will be on strike until our demand that all pension funds be exempted from the DEP is granted,” he said.

Organised labour decided to embark on the industrial action following a crunch meeting at the TUC Headquarters.

Explaining further, Dr Baah said organised labour would not compromise on its stance to protect the pensions of workers, and that the government had the opportunity until December 27 to correct its decision.

“We are not sitting down for our pension funds to be toyed with for the most vulnerable to suffer because somebody has made mistakes,” he added.

Workers from various labour unions, clad in red attire and wearing red armbands, received the announcement of the strike with chants and shouts of ‘No haircuts on our pensions’, ‘We will never accept haircut’ and ‘We will roll over haircuts’.

The Minister of Finance had announced that the government would implement a voluntary DEP as part of measures to reduce the debt burden and give the government some breathing space to deal with the fiscal challenges facing the country.

With the DEP, domestic bondholders face steep interest rate cuts and the lengthening of tenure on their investments.

In addition, domestic debt investors will be asked to exchange their existing securities for new ones that may offer a zero coupon in the first year, five per cent in the second and 10 per cent in the third year.

Holders of short-term debt securities, comprising Treasury bills of 91 days, 182 days and 364 days, will be excluded from the DEP.

Figures from the Central Securities Depository show that pension funds hold six per cent of the government’s domestic debt.

In an interview with the Daily Graphic after the press conference, the General Secretary of GNAT, Thomas Musah, said workers in the country were some of the poorly paid on the continent and, therefore, the DEP by the government would make them worse off.

He said the move by the government to sacrifice the pensions of workers could also have security implications for the country.

“National Security includes human security. The government cannot compromise on security conditions because it is in difficulties. This is not done anywhere,” he said.