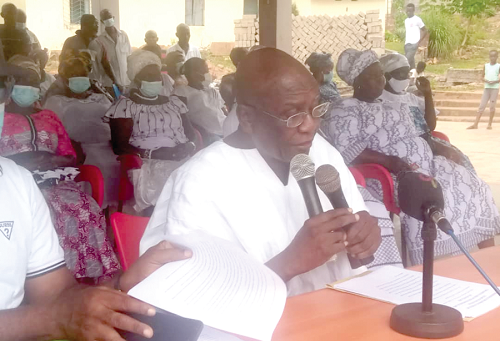 The chiefs and people of Tsito have denied allegations by Peki chiefs that they intend to install a chief at Dededo, a community within an area under legal dispute.

The Paramount Chief of the Peki Traditional Area, Deiga Kwadzo Dei XII, called on the government about a week ago to halt the upcoming installation to prevent any mayhem in the area.

However, at a press conference yesterday, the spokesperson for the Tsito chiefs, Mr Robert Badu, said the allegations were false and that they had never planned any installation in the said area.

“We do not know or have any plan to install a chief at Dededo as alleged by Deiga Dei XII,” he stated.

Mr Badu explained that on May 11, 2021 and June 27, 2021 two clans of Dededo installed leaders, which they (the people of Tsito) accepted because the people of Dededo properly informed them about the need to replace their former leaders.

According to him, Deiga Dei XII never raised issues about those installations and, therefore, he was surprised to hear him make such allegations against them and “inciting violence.”

He also said allegations of them installing a telephone mast on the disputed land to finance a legal battle between Tsito and Peki over some disputed lands as well as allegation of sand winning and cattle ranch were all false.

Mr Badu stated that it was untrue that Dededo was a community populated by settlers mainly from Tongu and Ando, which was an “indigenous Peki settlement and, therefore, should not be part of the Ho-West district.”

“We indeed have a land dispute which has been in the court for over 60 years now. The Court of Appeal and the Supreme Court have heard the case and taken far reaching decisions but the long and short of the matter is that we are still in court. As citizens of a democratic state, we both need to await the final decisions of the court,” he stated.

The Tsitos, he assured, were peace loving people and would, therefore, not do anything that would jeopardise the peace the country was enjoying.