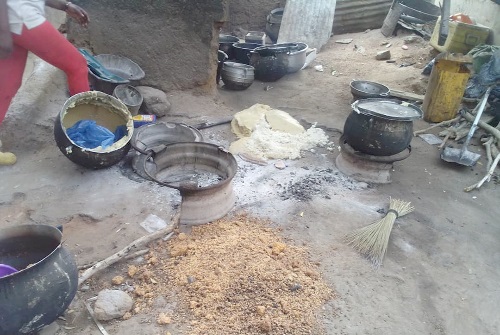 The food of some vendors poured on the floor Follow @Graphicgh

An eviction exercise along the Bawku-Bolgatanga highway on Thursday, March 17, 2022, turned bloody when a trader was shot and a journalist allegedly assaulted.

Robert Atiiga of Bawku-based Sunshine FM suffered a head injury and bruises over his body from the physical assault by the security personnel as he reported on the relocation of the traders, while a 70-year-old trader who was shot in the head as she ran for safety is currently in a critical condition at the Quality Medical Centre at Bawku.

Due to the volatile security situation in the town, traders have moved out of the old market to do business along the highway.

However, around 7:30 a.m. yesterday, a combined team of police and military personnel stormed the place and ordered the traders to go back to the old market.

In the ensuing exchanges, the security personnel destroyed some of the items of the traders.

The Manager of Sunshine FM, Madinatu Ahmed, said when Atiiga got wind of the information that the traders were being driven away from their current location, he rushed to the scene to cover the event in his Sunshine FM-branded jacket with his identity card hanging around his neck.

She alleged that some of the security personnel who identified him moved towards him and started beating him up.

She said she received a call that Atiiga was under attack and rushed to the scene only to find him in the custody of the security personnel.

“When I got there, the security personnel asked me to leave the scene since no journalist had been invited,” she said.

She said she was surprised that one of the personnel went as far as threatening her that if she did not leave the scene, she would be stripped naked or gunned down.

Atiiga was eventually released, and he has since lodged a formal complaint at the Bawku Municipal Police Command, before seeking medical care at the Vineyard Hospital at Bawku.

By 3:15 p.m, calm had returned to the town after the early morning incident, with a few residents going about their normal duties on the streets although many others remained indoors.

Last Wednesday, the unending violence in the town recorded more casualties when three people died and five others got injured.

The casualties were recorded during an exchange of gunfire between soldiers and some residents at Barbari-Buabula, a suburb of the troubled Bawku town.

In the exchanges, which lasted for some hours, a nine-year-old boy, a 16-year-old girl said to be a student, and an elderly man were killed when they were caught up in the crossfire.

The injured were made up of three soldiers and two civilians.