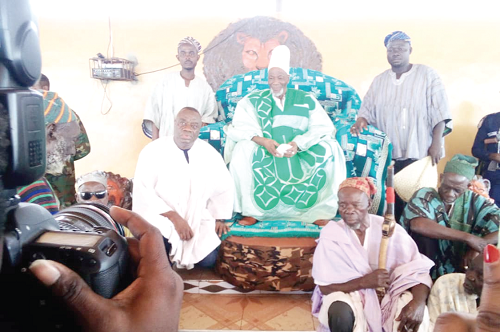 Dr Ibrahim Mohammed Awal (seated left), Minister of Tourism, Arts and Culture, after the meeting with Ya-Na, Abukari II, the Overlord of Dagbon, at the Gbewaa Palace in Yendi Follow @Graphicgh

The Ministry of Tourism, Arts and Culture has held a meeting with industry players in the Northern Region to fashion out ways to improve on the fortunes of the area, which boasts rich cultural and tourist sites.

Discussions centred on how best to develop, package and market the region’s attributes to create jobs and generate income for the people.

The meeting, held in Tamale, formed part of the activities of the Sector Minister, Dr Mohammed Ibrahim Awal, who is in the Northern Region to familiarise himself with the various tourist sites and opportunities in the area.

At least two tourist sites in each of the 16 regions will be developed into iconic sites to make them attractive to both domestic and international tourists.

The minister was accompanied by the Head of Monitoring and Evaluation at the ministry, Dr Alphonse Kumaza; the Deputy Chief Executive Officer (CEO), Operations, Ghana Tourist Authority (GTA), Mr Ekow Sampson, and the Northern Regional Director of the GTA, Alhaji Hakeem Ismael.

The minister expressed his determination to make the sector the number one contributor to Ghana’s Gross Domestic Product (GDP), saying that was in line with the ministry’s agenda to generate more than $5 billion by the close of 2022.

"Tourism is now number four in terms of contribution to the Ghanaian economy, after oil and gas, gold and cocoa. We want to make tourism, arts and culture the number one contributor to GDP by generating $5 billion annually," the minister said.

He said the ministry had since kick-started an initiative to promote domestic tourism to create national cohesion, as well as energise the local economy.

"While international visits fetched us 1.1 million people in 2019 before the pandemic in 2020, domestic tourism was not up to 300,000 people, hence the need to promote domestic tourism,” the minister added.

He, therefore, called on all stakeholders, including traditional authorities and the media, to get on board and promote domestic tourism.

The Chairman of the Northern Regional Chapter of the Ghana Hotels Association and CEO of the Nim Avenue Hotel, Tamale, Mr Cosmos Hassan Alhassan, called for the decentralisation of national conferences and activities to other parts of the country.

That, he said, would accelerate the development of the regions and bring immense benefits to the people.

Other stakeholders, such as musicians, dancers and film producers, also appealed for the rehabilitation and completion of the Centre for National Culture, including the theatre.

They further entreated the government to support them with stimulus packages to help them in their work following the outbreak of the COVID-19 pandemic, which they said had affected the industry and their incomes.

Dr Awal and his entourage also paid a courtesy call on the Overlord of Dagbon, Ya-Na Abukari II, after which the minister visited some tourist sites in the area.

They included the Greenwich Meridian Centre, the German-European cemetery, the German-Dagomba battleground at Adibo, as well as the tomb of a Dagomba war leader, Kumbon-Nakoem Ziblim, all in the municipality, the Traditional Seat of Dagbon.

Dr Awal said the ministry would construct a museum in Yendi next year to house the cultural relics of Dagbon to attract both domestic and international tourists to the area.

The Ya-Na, in a speech read on his behalf, said the Dagbon state, which was founded around the 14th Century, occupied an area of 8,082 square miles and was blessed with a unique cultural identity, such as music, history, artifacts, buildings and attire.

He said the area also had many tourist sites which could be developed, packaged and marketed to attract tourists.